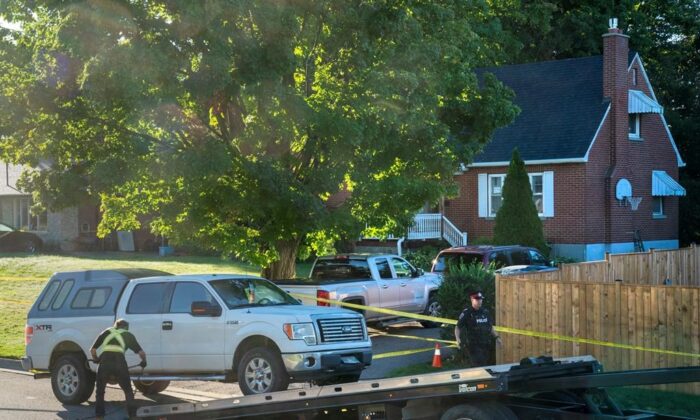 Police remove a truck with Manitoba licence plates from the front of a home on Parklane Avenue in Oshawa, Ont. on Sept. 4, 2020. (The Canadian Press/Frank Gunn)
Canada

OSHAWA, Ont.—Police in Oshawa, Ont., have identified four people killed in a mass shooting early Friday morning as a father and three of his children, as they continue to seek a motive behind the carnage that took place in a family home.

A 50-year-old woman who was injured in the shooting is also related to the family and continues to recover in hospital.

Police have identified the shooter as 48-year-old Mitchell Lapa, who died of a self-inflicted gunshot wound, and say he was an “uninvited person.”

Police have not yet specified Lapa’s relation to his victims, and the homicide unit is still investigating the motive behind the shooting.

“Investigators also want to speak to anyone who knew the lone attacker, Mitchell Lapa, as they seek to understand the motivation and reasons for this attack,” said Durham police in a statement.

“If anyone has details or background information about him, they are asked to contact their local police service or one of our lead investigators.”

Condolences for the Traynor family have been pouring in on social media throughout the weekend, with many describing the family as generous, caring, and deeply involved in the local sports community.

“The Traynor family were beloved and active members of the Oshawa community,” reads a GoFundMe page set up to support the surviving members of the family, which had raised more than $85,000 by Sunday evening.

“Their acts of kindness, love and generosity are unmatched. The impact the family had on everyone they touched will be forever remembered.”

The Durham Catholic District School Board’s director of education offered support to students and families who knew the Traynors.

“Words cannot adequately express our profound shock and deep sorrow over this terrible event,” Tracy Barill said in a statement.

“As a Catholic community rooted in faith, we continue to pray for the family members and those affected most directly by this heartbreaking news.”

Ken Babcock, president of Baseball Oshawa, said Chris Traynor had coached with the program for many years, while Joseph Traynor was a member of the Legionaires rep team.

“Words cannot describe the shocking and senseless tragedy that has struck our wonderful community in Oshawa and impacted our collective baseball family,” Babcock said in a statement.

Neighbours had described the Traynor family as caring deeply for each other, and said they were often seen spending time playing games and doing chores together in the yard.

The City of Oshawa announced that flags would be lowered to half-mast at city hall and other facilities.

“Our thoughts and prayers go out to the families and friends during this difficult time,” Mayor Dan Carter said in a statement, while thanking police and first responders.