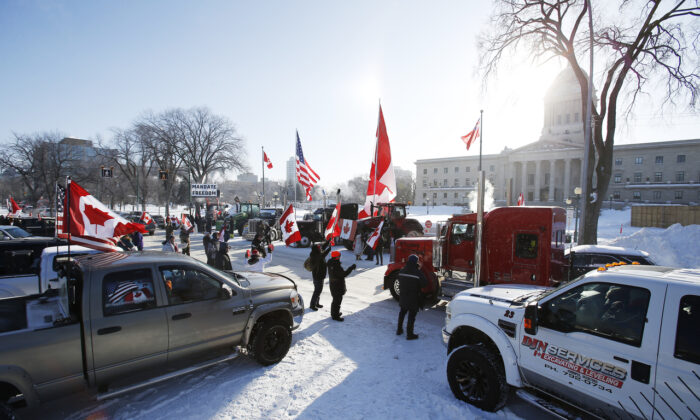 People rally against provincial and federal COVID-19 vaccine mandates and in support of Ottawa protesters, outside the Manitoba Legislature in Winnipeg on Feb. 4, 2022. (The Canadian Press/John Woods)
Canada

Winnipeg police have identified the driver accused of running his vehicle into a crowd of protesters participating in the Freedom Convoy rally at the province’s legislature on Feb. 4, injuring four people.

David Alexander Zegarac, 42, is facing 11 charges, including four counts of assault with a weapon.

The driver accused in Friday night’s hit & run has now been identified as David Alexander Zegarac, 42. He faces 11 charges including Assault with a Weapon.

On the night of Feb. 4, the Winnipeg Police Service (WPS) was informed of a motor vehicle collision near Broadway and Memorial Boulevard, where a Jeep Patriot drove through a group of protesters at the Freedom Convoy rally. The driver then fled the scene.

“The Jeep fled west down Portage Avenue, where numerous witnesses reported it travelling at high speeds and passing through red lights,” the police said in a statement on Feb. 5.

WPS officers stopped the vehicle on the 4800 block of Portage Ave., with the help of the RCMP. The driver was arrested after a brief struggle and has remained in custody since.

Zegarac was not part of the trucker convoy protest against the federal government’s COVID-19 mandates and restrictions, according to WPS public information officer Rob Carver.

“The accused was not participating in the protest. What some comments he made after his arrest suggested is that his motivation was not specifically about the underlying causes of the protest or the mandates,”Carver said in a press conference on Feb. 5, when asked to comment on the motivation of the accused.

The police said four adult males were injured in the Jeep incident. Three sustained minor injuries that did not need medical attention, while the fourth was treated in hospital and released.