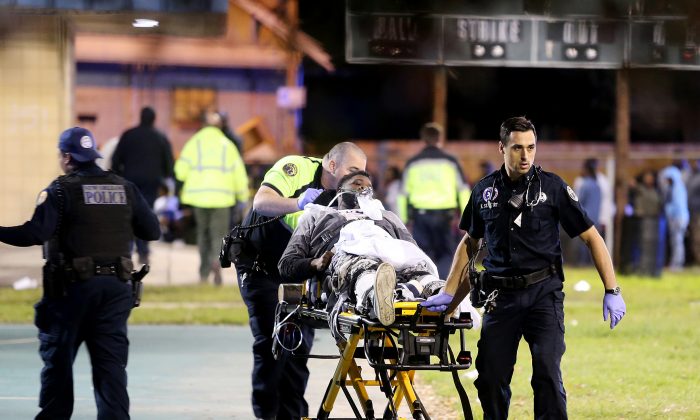 Paramedics with New Orleans EMS remove a person from the scene following a shooting in New Orleans' 9th Ward on Nov. 22, 2015. Police spokesman Tyler Gamble says police were on their way to break up a big crowd when gunfire erupted at Bunny Friend Park. (Michael DeMocker/NOLA.com The Times-Picayune via AP)
Crime and Incidents

NEW ORLEANS—Police on Monday sought to determine what touched off a wild shootout in a crowd of hundreds of people at a New Orleans playground, where an evening of fun at a block party swiftly turned into a nightmare.

The shootout, combined with the recent shooting of a good Samaritan who tried to help a woman who was being dragged toward a vehicle, put a city that has long struggled with violence on edge.

The Sunday night shootout happened as hundreds of people—possibly as many as 500—gathered at the Bunny Friend Playground in what police described as a block party. A music video was also being filmed there. Police said neither event had a permit.

Officers were nearby overseeing a neighborhood parade when they received reports of a large crowd at the park. The shooting happened while they were on their way over to disperse the gathering. Two groups pulled out weapons and started firing, police said.

Local media reported a mad scramble as terrified people ran from the playground, leaving behind cellphones and IDs. The gunmen escaped.

Seventeen people were wounded, including 11 who were under the age of 21, authorities said Monday.

Damien Gaines said he, his two sons, ages 10 and 13, and their 10-year-old cousin had just come home from an athletic awards ceremony. He decided to go to the park with the boys when he heard music. But less than 10 minutes later, he said, an acquaintance he knew only as Peanut strode by, warning him to go home because of the shootout.

Then he heard gunfire—two to three minutes of continuous shooting.

He and the boys ran. Then his younger son said: “‘Daddy, I’m shot, I’m shot.'” His blue jeans had turned red. Gaines put the boy on his back, picked up the cousin and ran home, where his older son had already arrived.

The wounded boy was treated at a hospital and released.

Authorities asked witnesses or anyone with video of the incident to come forward. They also planned a community meeting for Monday evening in the park to discuss the shooting.

Considering the number of people at the park, it’s “pretty clear that people do know” who the shooters are, Mayor Mitch Landrieu told a news conference Monday.

“If you want to take back your community, you have to help us,” said the mayor, who likened the shooting to domestic terrorism.

Police Superintendent Michael Harrison said the shootout was probably gang-related. He said it’s “highly possible” that the shooting was related to the city’s heroin trade but authorities are still investigating.

The mass shooting came just a few days after another startling attack. On Friday, a Tulane medical student spotted a man dragging a woman toward an SUV and tried to intervene.

Surveillance video released by police showed the man shooting the student in the abdomen and then standing over him and trying to shoot again, but the gun jammed.

Police announced Monday that they had captured the gunman. A spokesman for Tulane University said Peter Gold was in “guarded condition” and continues to improve.

New Orleans officials have touted an overall drop in crime this year over last year. The murder rate, which had been dropping since 2011, fell to its lowest level last year since 1971. But statistics so far this year for the most serious crimes of murder, armed robbery and rape are up. Incidents like Sunday’s shooting can “change the feel of the city quickly,” Sharf said.

Landrieu has been criticized for allowing the police force to fall below 1,200 officers when officials say it should be around 1,600. But Landrieu has said that is the result of hard choices made after he inherited an $80 million budget deficit in 2010. The city has given raises to officers this year and is actively recruiting.

The staffing levels mean police are not able to do the community policing that is necessary to build bonds with citizens and get a sense of tensions building up before violence erupts, Sharf said.

“The things that the research says work we haven’t really done in quite a while,” he said. “Getting the pulse of the neighborhood is the art of neighborhood policing.”