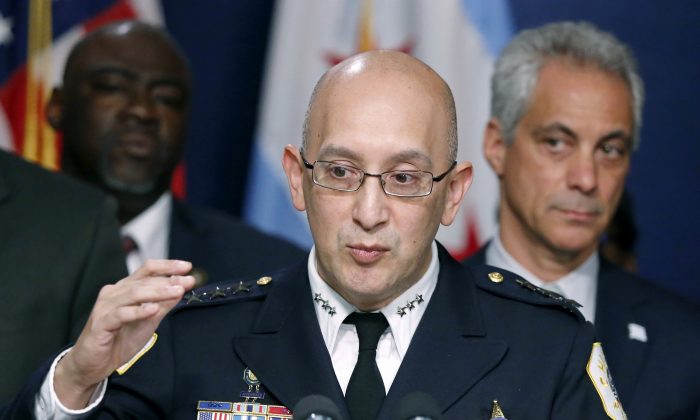 CHICAGO—Homicides and shootings have doubled in Chicago so far this year compared with the same period in 2015, and police have seized fewer illegal guns—more possible signals that officers have become less aggressive in the aftermath of a shooting video released last fall.

Interim Police Superintendent John Escalante said Tuesday that he was so concerned about officers possibly holding back that he filmed a video for the entire department in which he encouraged them to do their jobs and assured them that a federal probe of the force was not aimed at individuals.

“We are aware that there is a concern among the rank and file about not wanting to be the next YouTube video that goes viral,” Escalante said in the video before introducing a segment of his own to remind viewers “why we took this job and swore this oath of office.”

The statistics come almost exactly three months after the city on the orders of a judge released the video of officer Jason Van Dyke firing 16 shots at Laquan McDonald, a black teen killed in 2014. Since that day, Van Dyke has been charged with murder, and Superintendent Garry McCarthy has been fired. The Department of Justice launched a civil rights probe of the police force, and Mayor Rahm Emanuel has sought to regain public trust in the department and his own leadership.

The crime figures offer a stark reminder that the nation’s third largest-city is nowhere near shedding its reputation as a dangerous hotbed of street violence. In the first two months of the year, authorities recorded 95 homicides, compared with 48 for the same period last year. Thus far, there have been 406 shootings, or more than twice as many as the 180 for the same two-month period in 2015.

The McDonald case raised concerns that officers fearful of attracting negative attention, may be pulling back and becoming more passive. Quietly, officers say they are not going to take chances that might land them in legal trouble or threaten their jobs and pensions.

“I’m hearing that police are standing down because they’re afraid what might happen to them, that when they get a call, they wait to see if someone answers it first,” said the Rev. Michael Pfleger, a prominent Roman Catholic priest and activist on the South Side. “I get really angry about that. If they are not going to do police work, they need to get out.”

Evidence of a pullback starts with an 80 percent decrease in the number of street stops that the officers have made since the first of the year. Escalante said he believes that decrease is largely tied to the fact that since the first of the year, officers have been required to fill out far lengthier forms than the brief “contact cards” they used to use.

He said he hopes the newer and simpler forms the officers started filling out on Tuesday will help bring those numbers back up.

The unwillingness to make as many stops as they once did might also explain the steep decline in gun seizures. Normally, the number of illegal guns recovered by police would climb with the number of homicides and shooting incidents, but the opposite has happened. So far this year, the total number of illegal guns seized by the department has fallen from 955 in the first two months of last year to 829 so far this year.

The decrease is particularly striking after the way McCarthy used to put seized weapons on display at news conferences. The displays were meant to show that his department was taking more guns off the streets than any other police force in the nation and to urge lawmakers to enact tougher gun laws.

The president of the union representing Chicago police officers did not respond Tuesday to messages from The Associated Press seeking comment.

He said he is optimistic that the street-stop numbers will continue to climb with the new shorter form that replaces the two-page investigatory stop form officers have been filling out since Jan. 1. And he said he is hopeful that certain changes, including the deployment of 100 newly trained sergeants to increase supervision, will ease the crime numbers.

“I believe they (officers) are starting to make the effort again,” he said, “to try to do what they can to bring this violence down.”