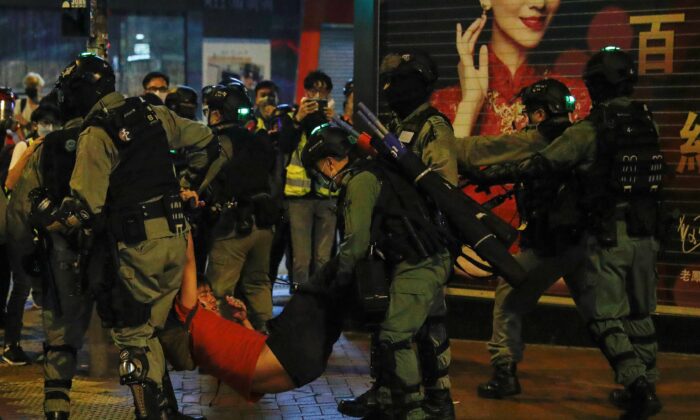 Hundreds of protesters took to the streets in Hong Kong on Feb. 29 in a rally to mark six months since local police stormed a subway station in an attempt to arrest demonstrators—one of the most violent days in the pro-democracy movement in 2019.

Dozens of protesters began to gather outside one of the exits of Prince Edward metro station in Mongkok, at around 5 p.m. local time on Feb. 29. They laid down flowers and turned the area into a makeshift memorial.

An hour later, riot police showed up to clear the flower memorial and cordoned off the area, claiming that protesters were taking part in an illegal assembly and were littering, according to local broadcaster RTHK.

On Aug. 31, 2019, riot police stormed Prince Edward metro station, and beat and pepper-sprayed unarmed passengers. Their actions sparked intense anger from protesters, who viewed it as another instance of police violence during pro-democracy demonstrations that rocked the city in the latter half of 2019.

On the evening of Feb. 29, clashes erupted between protesters and police at multiple locations in Mongkok, marking one of the most violent days after a period of relative quiet in the protest movement, with fears about the coronavirus keeping many residents indoors.

#NOW #HongKongProtestors symbolically stand off against #HongKongPolice during tonight's protest against the lack of independent inquiry for the 8/31 Prince Edwards Station attacks.

Police officers waved their batons and fired pepper spray in an attempt to clear protesters and reporters outside of the Mongkok police station.

Hong Kong media HK01 reported that a police officer drew his gun without firing at Soy Street in Mongkok, as protesters threw plastic water bottles and umbrellas at him.

Police and #HongKongProtestor standoffs return to Mong Kok as #HongKongPolice use tear gas to disperse the 6 month anniversary protest of the Prince Edward station attacks. pic.twitter.com/dms3jysMaz

Protesters could be heard shouting slogans such as “Liberate Hong Kong, revolution of our time” and called for the police force to be disbanded, echoing chants from previous rallies.

The Hong Kong government, in a press release on March 1, stated that it used “minimum necessary force to conduct dispersal and arrest operations” against “rioters” who had carried out acts such as setting up roadblocks, hurling petrol bombs, and throwing objects at police officers.

Mong Kok MTR Station is currently shut down due to road blockades and street standoffs between #HongKongPolice and Protestors.

Multiple rounds of tear gas have been fired on Nathan Rd. pic.twitter.com/cAquaZgWaw

Hong Kong police announced March 1 that it had arrested a total of 115 people, aged 15 to 54, for acts such as illegal assembly and setting fire, in MongKok on Feb. 29.

The Hong Kong Journalists Association, in a statement on March 1, condemned the police for its “indiscriminate attack against reporters and citizens” in MongKok the day before.

The association said that the police had used foul language and pepper spray to disperse reporters at the scene, in violation of press freedom.

Police actions during the Aug. 31 incident had drawn criticism from international observers and rights groups.

Tam Man-kei, director of Amnesty International Hong Kong, issued a statement a day after the incident, calling for an investigation against the police.

“Video footage shows police stormed into the train carriage and used batons to repeatedly beat people posing no threat whatsoever. Pepper spray was used in a carriage where people had no means to retreat, while medics were barred from entering the station.”

6 months since 8.31 Hong Kong police terrorized civilians inside Prince Edward Station. Their partnering mobs did the same on 7.21 in Yuen Long Station.

They lockdowned the station for few hours, ppl suspected death in there. https://t.co/mK1mJkeBUg

Police later said they were investigating the Aug. 31 incident, although no further details have since been released.

The protest movement in the city had quietened down in recent months as residents deal with the COVID-19 outbreak. Hong Kong reported its first cases of the virus on Jan. 23, and now the city has 95 known cases of the disease and two fatalities.

The ongoing protests began in June 2019 over a now-withdrawn extradition bill, as locals feared it would threaten the city’s autonomy. The protests later evolved into greater calls for democracy in the Chinese-ruled city.

Police have arrested over 7,000 people since June, according to local media.

The clashes on Feb. 29 came a day after three prominent supporters of the Hong Kong protests were arrested: Yeung Sum, former chairman of the Democratic Party; Lee Cheuk-yan, secretary-general of pro-democracy group The Hong Kong Confederation of Trade Unions; and Jimmy Lai, founder of Next Media, which owns pro-democracy paper Apple Daily.

Now released on bail, they were charged for participating in an “illegal assembly” on Aug. 31, 2019, and are required to appear in the Eastern Magistrates’ Courts on May 5.

U.S. Sen. Ted Cruz (R-Tex.) condemned Lai’s arrested, saying in a tweet: “Instead of focusing on the #coronavirus, the HK government and Communist Chinese Party are exploiting this crisis to attack political opponents.”

The U.S. Congressional-Executive Commission on China (CECC) condemned the three arrests and said the Hong Kong government should be “investigating police violence at Prince Edward Station on Aug 31st.”

“Outrageous actions like this only undermine public trust during #COVID19 epidemic,” CECC stated.

Local activist group Civil Human Rights Front (CHRF), the organizer of some of the biggest marches since June 2019, said in a statement that the three arrests were “planned by the police to suppress opposition.”

CHRF was originally planning an assembly and parade on Aug. 31, 2019, but had to call off both events after its application was rejected by the police and its court appeal of the decision was turned down.

Despite the police ban, thousands of protesters marched from Wan Chai to Central in the afternoon, before the police’s storming of Prince Edward station in the evening.

“Their actions further ingrain the tragedy of 831 Protest into our memory and we will never forget police violence,” CHRF stated.

Hong Kong Epoch Times and Reuters contributed to the article.