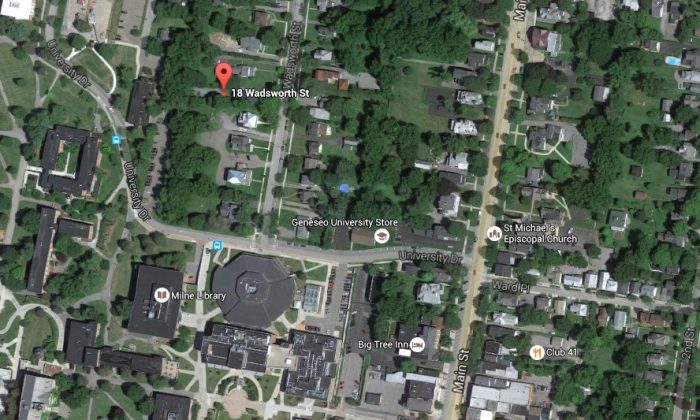 The bodies were found in a house on 18 Wadsworth Street, according to Democrat & Chronicle. (Google Maps)
Crime and Incidents

Authorities are investigating the deaths of three people who were found in a house in Geneseo, a town about 35 miles south of Rochester, N.Y.

Police responded to the home on 18 Wadsworth Street in Geneseo around 6 a.m. Sunday after receiving a report that some kind of incident had taken place.

No official information as to the cause of death or possible suspects was released.

No firearm was used but a knife was recovered at the scene, Szczesniak said during a press conference live-streamed by Democrat & Chronicle.

There’s “absolutely not” a reason to believe that the general public safety is in jeopardy at this time, Szczesniak said.

Police has no witnesses that heard or seen anything.

The house was a local residence of Kelsea Annese.

One of the reporters at the press conference was heard saying that, according to police scanner traffic, Kingston’s father called 911 saying his son killed his girlfriend and was thinking of committing suicide.

Officer Szczesniak said he can’t confirm who called 911 and declined to confirm the incident as a murder-suicide. He said though, that based on the information police has so far, one of the individuals may have been a perpetrator.

Another press conference is planned for Monday 2 pm.

We have experienced a terrible tragedy in Geneseo today involving two of our students and a former student. Our thoughts…

Police say the 2 men, woman found dead in Geneseo house appeared to be in their 20s. https://t.co/XpjXfNSGKd pic.twitter.com/EtfREwo5hl

Geneseo PD will be doing a media briefing at 4:30 pm. Names will be released then. #roc @dandc pic.twitter.com/kMVLyW8xpo

The house is near the campus of SUNY Geneseo. The school put out a statement on its Facebook page that it was working with authorities and later released a fact sheet on its website.

There is an active police investigation underway near campus on Wadsworth Street. There is no threat to public safety but please avoid the Wadsworth Street area in Geneseo. Thanks for you cooperation.

We understand and share your concerns regarding the ongoing off-campus investigation. We’re awaiting release of additional information from Geneseo Police and will update you as soon as we are able.