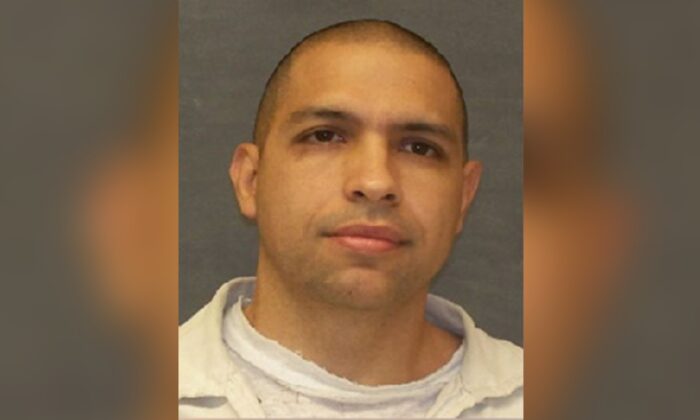 A convicted murderer who escaped from a transport bus for high-risk inmates in Texas on May 12 was shot dead by law enforcement officials on Thursday, authorities said.

Lopez, 46, is believed to be connected to the murder of a Houston family of four minors and one adult. The fugitive stole the family’s truck, a 1999 white Chevrolet Silverado, from a rural weekend cabin after he allegedly killed the family, police said.

Jason Clark, a spokesman for the Texas Department of Criminal Justice (TDCJ), said authorities in Atascosa County located the missing truck and trailed it with spike strips.

The suspect then crashed the vehicle into a tree after a brief chase and engaged in a shootout with officers, the spokesman said. No officers were injured in the firefight.

“He fired several rounds at officers and was armed with an AR-15 and a pistol,” said Clark, adding that authorities suspect both weapons were likely stolen from the cabin where he allegedly murdered the family of five.

Authorities found the bodies of the family after investigating a call from someone who had not heard from an elderly relative, according to a June 2 notice posted on the TDCJ website. Lopez was identified by police as the prime suspect in the family murder.

The family is believed to have arrived early on Thursday at the weekend cabin, which they owned, Clark said. The five are believed to have been killed Thursday afternoon and had no link to Lopez, who has been described as a former member of the Mexican Mafia prison gang with ties to South Texas.

“Lopez is affiliated with the Mexican Mafia and has ties to the Rio Grande Valley and San Antonio. He should be considered armed and extremely dangerous. Do not attempt to apprehend this fugitive,” the U.S. Marshals said in a May 25 statement.

According to the statement, Lopez escaped custody on May 12 when being transported on a prison bus in a rural area near Centerville, the county seat of Leon County, which has roughly 16,000 residents and is about 50 miles north of the state’s Huntsville prison headquarters.

The U.S. Marshals said Lopez escaped his restraints and a metal cage, stabbed the prison bus driver, and stole the bus. The bus driver’s wounds were not life-threatening, according to reports.

No one else from the bus escaped.

Lopez was on the TDCJ 10 Most Wanted Fugitives List and officials offered a combined reward of up to $50,000 for information leading up to Lopez’s capture.

The convicted murderer was serving a life sentence for capital murder in Hidalgo County and attempted capital murder in Webb County, according to the TDCJ. Robert Hurst, a spokesman for the state’s criminal justice department, said the murder was committed with a pickaxe.

“This is a very dangerous man. Back in 2005, he killed someone with a pickax. In 2004, he shot at an officer. If he has that device, whatever he used to cut through the door and also stab the officer, folks need to be aware he may still have that on him,” Hurst told KHOU 11.