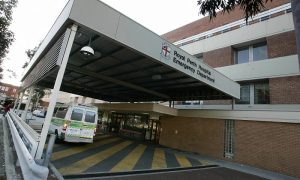 Police were called to investigate a reported break and enter in progress in the Australian city of Brisbane sometime before daylight Christmas day.

Video footage from a police officer’s body-cam reveled what occurred as they responded to the call at a house of the corner of Prancer and Dasher Streets in the suburb of Mount Gravatt.

But as you can see by the video below, they didn’t have a chance to nab the fast-moving intruder.

Presumably they made their report detailing that the suspect was dressed in red and white and was last seen flying off in a fast moving sky-borne slay.

The tongue video is a part of the Queensland Police Service’s Christmas spirit and was posted on their Facebook and Twitter pages.

On Christmas day the video went viral and earned praise, especially among parents.

“Thanks QPS! Just showed my kids this and told them he’s already started his run. I’ve never seen them get ready for bed so fast!” said one mother via Facebook.

Another parent wrote: “QPS you rock! My six year old thinks the world of you and wants to be a police officer even more in the hope he meets Santa. Merry Christmas to you all and thanks for keeping us safe.”

Another wrote: “I hope they catch him. Every Christmas eve he drinks my rum.”

An Australian expat in the US also had something add: “I’m an Aussie now living in the USA, I am a police chaplain in Northern Ohio. I have shared this to my page, Merry Christmas QPS. May St. Michael watch over you at all times.”

Wherever you are this festive season, Queensland Police wish you a happy and safe Christmas! ?? pic.twitter.com/Ro8YwtXl0o