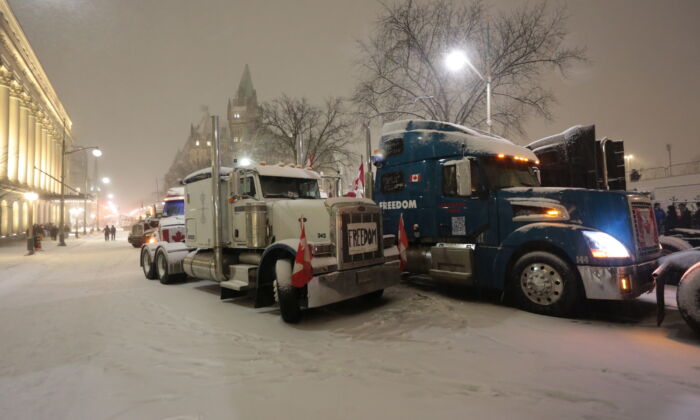 OTTAWA, Canada—Ottawa police established on Feb. 17 a limited access zone around the perimeter of the center of the Canadian capital that has been occupied by truckers, their rigs, and supporters for more than three weeks.

Under the recently introduced Emergencies Act, people are being refused entry to what has been designated as the “Secured Area,” which is within a two square mile area bounded by Bronson Avenue to the Canal, the Queensway to Parliament Hill.

In a statement, the Ottawa police said “anyone can enter the Secured Area if you fall under an exemption in the regulations.”

The exemptions are for people who live, work, or are moving through the area “other than to participate in or facilitate the assembly.”

That is to join the protesters.

People are advised they can also enter the area with police permission, or if they are an officer of the law or a public servant going to work.

Taxi drivers are not exempt and cannot enter the lockdown area to pick up fares for people wanting to head to the airport. Even the city’s light rail has been stopped from running into the area.

Hotel staff trying to get to their jobs took up to two hours to get there on the morning of Feb. 18.

One said he was stopped at every major intersection leading into the city center and questioned as to why he was heading there.

Ottawa police stated, “We want you to be aware that entering the Secured Area for the purpose of contravening the Emergencies Act, may result in you being arrested and/or charged.”

In the past 24 hours, two of the protest organizers have been arrested.

Tamara Lich and Chris Barber were taken into custody.

Charges include counseling to commit mischief.

A House of Commons debate on the Emergencies Act set for Feb. 18 was called off.