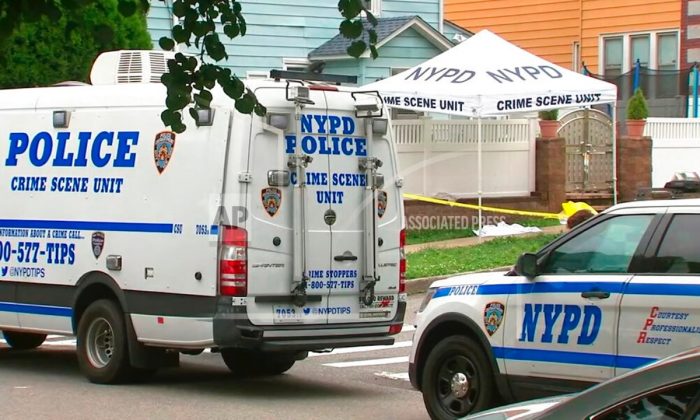 In this image taken from video provided by WABC-TV, New York City Police department vehicles are parked near a crime scene outside Crocheron Park in the Queens borough of New York, Tuesday, June 18, 2019. Police say what appeared to be a dead infant in a grassy area outside the park turned out to be a realistic-looking doll. (WABC-TV via AP)
Crime and Incidents

What looked like a horrific scene near a park in Queens turned out to be nothing more than “a lifelike prop,” according to New York police.

At about 8 a.m. on Tuesday, June 18, a runner spotted what she thought was a baby in the grass outside Crocheron Park in the neighborhood of Bayside, reported Fox5.

Alarmed by the “baby” lying face down on the ground, she called 911. Police arrived at the scene and initially reported that the blue-skinned corpse was a 3-month-old dead infant.

Neighbors told the media that following the report, around 200 officers arrived at the park looking for evidence.

The so-called baby was put in a bag, and the officers set up a crime tent in the park.

However, upon closer look, it turned out to be a realistic-looking doll or a theatrical prop. The Associated Press reported that its skin was apparently purposely colored to resemble decomposing skin.

Media reports that the lifelike doll had bruises on its skin, was wearing a diaper, and had a T-shirt that read, “the crawling dead.”

The lettering on the shirt wasn’t initially visible because the doll was on its stomach.

“It appeared to be a baby with discoloration consistent with signs of prolonged death, but thankfully, it was actually a lifelike prop,” Fire Department spokesman Myles Miller said.

The error was discovered when personnel from the city’s medical examiner arrived to retrieve the body.

In a similar case, a lifelike baby doll prompted police in New Hampshire to smash a car window in 2016 in a rescue attempt that turned out to be a false alarm.

WMUR-TV reported that police in the town of Keene said someone called to report an infant left in a car at a shopping plaza on a hot day. Lt. Jason Short then arrived and shattered the window with his baton. He told the station he thought he was looking at a lifeless child, but noticed something was off when he began to breathe into the baby’s mouth.

The station reports the lifelike doll belonged to a Vermont woman who collects them as a way to cope with her son’s death. She says police told her they would pay for the broken window.

“I got there as soon as I could,” Short told ABC. “I don’t know how fast I was going, but it was quick.” What he saw “looked lifeless, looked dead,” Short recalled.

The doll was actually a “reborn doll,” which are dolls manufactured to look as lifelike as possible. Some “reborn dolls” can fetch as much as $2,000.

“It felt like a baby,” he said. “It looked like a baby. And–and everything about it was ‘baby,’” Short told the network.

Even though it was just a doll, it’s a reminder to keep children and pets out of hot vehicles during the summer months.