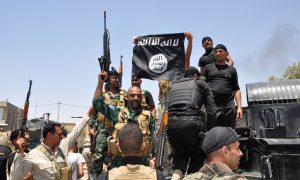 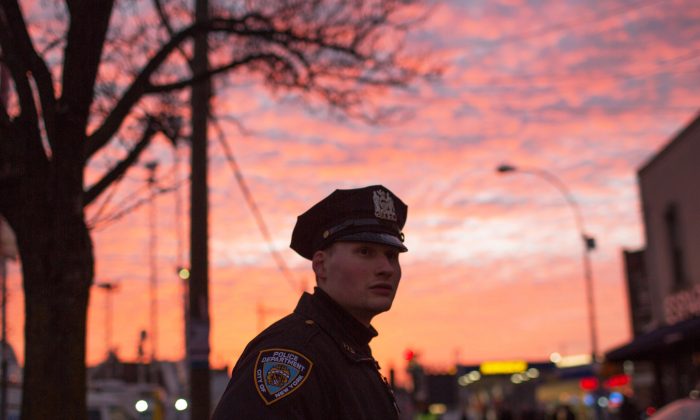 An officer directs traffic for the funeral of slain NYPD Officer Rafael Ramos, one of two officers murdered while sitting in their patrol car in an ambush in Brooklyn, New York City, in December 2014. (Kevin Hagen/Getty Images)
Crime and Incidents

Police Criticized for Use of Force Often Have No Other Choice

Police officer John Cardillo was responding to a call in a restaurant in the Bronx in the 1990’s with three other police when they encountered their suspect. At five-foot-nine he was only about 135 pounds, but so high on a cocktail of hard drugs that he could use his body as a weapon.

“His eyes were completely dilated—he looked like a zombie,” said Cardillo, who retired from the NYPD after a decade and went on to do consulting work with police forces around the country and work as an on-air media analyst.

Years later, though, when asked to recall some of his experiences with suspects on mind- and physiology-altering drugs, that night in the Bronx comes to mind. When the man stole a baseball bat from the restaurant owner, it took four extremely strong male cops to subdue him. They later marveled at the insanity they’d witnessed and the fact that nobody had been injured.

“We could not pry the guy’s fingers off the bat,” recalled Cardillo. “We pepper-sprayed this guy, we used our baton on this guy. Later on we found out he was on a mix of crazy drugs—crack, heroin, PCP.”

Such hard drugs can change a person’s perception of pain and reality to the point that they feel nothing and don’t understand the potential consequences of what’s unfolding.

“It struck me was just how ineffective non-lethal weapons were,” said Cardillo.

This was one of hundreds of encounters he had as a cop with uncooperative suspects. These experiences helped inform his opinion that current court of opinion criticizing police for their use of force is unfair.

“Departments need to start looking at better non-lethal solutions—you’re really putting police at a disadvantage,” he said. “No cop wants to go out there and kill someone. Cops are pretty distraught when they’ve shot somebody.”

Even in the context of necessary force, though, the options for containing a disturbance rapidly diminish when a suspect won’t cooperate.

The Case of Pasco

In Pasco, Washington, where suspect Antonio Zambrano-Montes was shot and killed by three officers on Feb. 10, there is a growing sense of confusion among even the police about the increase in the use of officers’ guns.

Pasco police have drawn their weapons four times (including on Zambrano-Montes) in the past year. According to Sgt. Brian Vaught of the Pasco Police, that used to be an incredibly rare occurrence. From 2005 to 2012, there wasn’t a single case of a Pasco cop firing their gun.

“We’re shaking our heads thinking what the heck are people doing?” said Vaught by phone on Wednesday. “It’s been so uncommon that we have this many shootings in such a short time. We get it. While we don’t want it to happen, we’re always trying to be prepared for it.”

Vaught said that in the past year, their small town of about 68,000 with a police patrol force of 41 is increasingly encountering people who just don’t comply with orders police give.

“The question is, what is going on with people that is causing them to push things farther than they have pushed before?”

In one shooting in the past year, the armed suspect refused to drop his gun when ordered to.

“It’s hard because we’re being judged by these four, because they’ve happened so recently.”

While the Pasco police won’t comment on the case of Zambrano-Montes because of an ongoing investigation and pending inquest, more than one cell phone video was taken by bystanders of the fatal encounter. The city faces a $25 million wrongful death suit by his family.

The three police who responded to a 911 call of Zambrano-Montes causing a disturbance can be seen pursuing him through a busy intersection after an ineffective attempt to taser him. They shot several times, missing him, and he continued to run. He ignored their orders to stop and had something in his hand, which was not a knife or gun.

Widely depicted as a simple Mexican farm laborer drawn into a brutal encounter with authorities, Zambrano-Montes was in fact no stranger to local law enforcement.

In January 2014, he was arrested under similar circumstances. According to county court documents of the incident, police who responded to a 911 call found Zambrano-Montes in an agitated mental state hitting cars with a broom. He refused to cooperate, threw a chair at an officer, and managed to unholster another officer’s gun. The cop tried to use a headbutt to subdue him, but it had no effect.

Zambrano-Montes would later confess to being on meth at the time. The powerful, mind-altering drug is cheap to make and buy, and is relatively easy to get.

People who use meth over a long period of time can also experience confusion, anxiety, and show violent behavior, according to the National Institute on Drug Abuse. Some repeat meth users can also experience psychosis, including paranoia, delusions, and hearing and seeing hallucinations.

The county coroner said it will be six to eight weeks until the toxicology report on Zambrano-Montes comes back. That will show whether he had meth or any other drugs in his system during the fatal encounter.

For police in Pasco and elsewhere, interacting with suspects on mind-altering drugs is just part of the job.

“Meth use is a problem, and it’s something we’d like to see less of,” said Vaught.

Most of the nation’s roughly 400,000 police will never use their gun in the line of duty, according to both Cardillo and Vaught. That doesn’t mean an encounter with an officer should be taken lightly, though.

In Texas, Quanell X, a frequent critic of police use of force and the head of Houston’s New Black Panther Party recently took part in a police simulation training with local news channel KHOU.

He discovered that getting people to comply with his orders and maintaining calm when in the shoes of a cop was incredibly difficult. It’s can also be difficult to quickly assess what is going on. He wasn’t even sure what a man who pulled a knife in a video simulation portion of the training had in his hand. It all happened so quickly he thought it could have been anything from a lollipop to a lethal weapon.

Quanell X’s conclusion as an activist after the experience: cooperate with police.

Speaking from the shoes of an officer, he told KHOU: “If I’m in a high-crime area that I’ve worked, and I know it’s a high-crime area and I know the kind of calls we get, I could easily see me pulling my gun quicker, on a simple call, I hate to say it. … If they tell you to do something, do it. When the suspect started being combative or argumentative, I want to pull my gun.”

In cases where police end up shooting a suspect in the torso, the public tends to cry foul at the use of force when the suspect dies. According to interviews with active duty and retired police, though, cops are not necessarily shooting to kill.

Rather, they are aiming for the largest center of mass available—often in the span of mere seconds—that a bullet is most likely to hit.

If all an officer sees is the suspect’s foot under a car, they will aim for the center of the foot. If a larger center of mass is available, that’s where they will aim.

Because it is so difficult to hit a moving target and no bullet stops until it hits something, police are trained to protect the public by aiming to hit whatever they are shooting at.