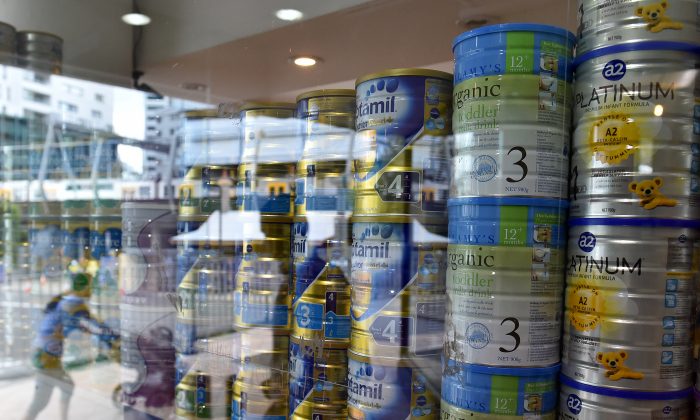 Police have broken up a black-market baby formula ring and seized nearly $1 million in alleged stolen goods and cash in suburban Melbourne, Australia, on Nov. 30.

“We found pawpaw, perfume, and face creams and just the general items you can buy at the supermarkets,” Anderson told the newspaper.

“The cash found is believed to be made as a profit from selling these stolen goods,” he added.

The sergeant believes the alleged stolen goods are sold interstate and overseas.

A 34-year-old male from Footscray has been charged with handling stolen goods. He is due to appear at Melbourne Magistrates’ Court on Feb. 26, 2018, reported Herald Sun.

The six other people, between the ages of 31 and 77, are currently being interviewed.

Baby formula has become scarce in some cities around the country, particularly Sydney and Melbourne. In October this year, shoppers were filmed frantically stripping shelves of baby formula in their local Coles, reported News.com.au.

Many concerned parents have spoken out about the baby formula shortages and against shoppers and daigou—online traders buying Australian products and selling them to China for inflated prices—who do not follow supermarket baby formula limits.

The ongoing baby formula shortages show no signs of abating. When sold overseas a 900g (31.7 ounces) tin of Aptamil Gold currently sells for about 200 yuan (AU$38) on Tmall, compared with $25 (US$19) in Australia, reported the news station.

Dear reader, we have a little favour to ask of you. We work hard to deliver important and interesting articles to you. Please help support independent journalism by sharing this article with your friends and family. It takes less than a minute. Thank you!