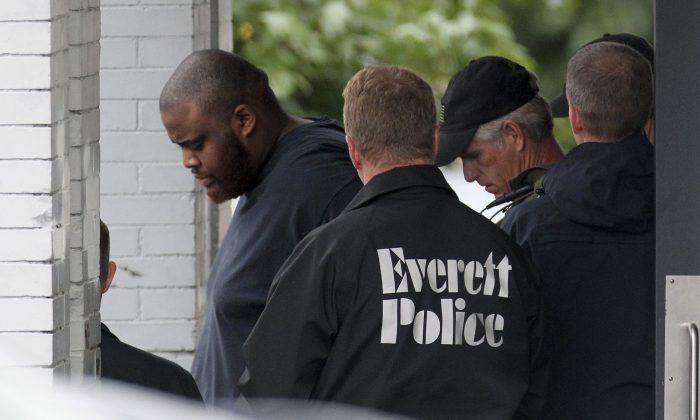 In this Tuesday, June 2, 2015 photo, authorities remove David Wright from a house in Everett, Mass., after a day-long police investigation at the property. (Boston Herald/John Wilcox via AP)
Crime and Incidents

BOSTON — A Boston man shot to death by the terror investigators who were surveilling him had talked about beheading blogger Pamela Geller before deciding to target police officers, Boston police said Thursday.

“There was some mention of that name,” said Police Commissioner William Evans, who dismissed it as “wishful thinking” while speaking on the “Today” show.

Geller wasn’t surprised that she may have been a target. She’s a combative personality known for provoking Muslims by campaigning against a mosque near the World Trade Center site in New York, sponsoring inflammatory advertisements and organizing Prophet Muhammad cartoon contest in Texas

“They want to make an example out of me to frighten the rest of the US into silence and submission,” Geller wrote in an e-mail to the AP on Thursday. “This is not about me. This is about whether the US will stand for freedom or submit and cower before violent intimidation.”

Usaama Rahim, 26, was killed Tuesday by anti-terror investigators who tried to question him.

Authorities told his family that they would show them a police video of the shooting on Thursday. Already shown to community leaders who then backed the police account, they say it shows officers retreating as Rahim lunges at them with a military-style knife, then shooting when he refused to drop it.

Rahim’s brother, Ibrahim Rahim, is a prominent religious scholar among Muslims and African-Americans in Boston. He initially disputed the police account, claiming his brother had been shot three times in the back, but released a statement Thursday calling on Muslims to “remain calm” and pray.

Rahim’s family announced a news conference at the shooting scene for later Thursday afternoon. They also hired two lawyers to ensure a “complete and transparent investigation,” said Ronald Sullivan, one of the attorneys.

The FBI said Rahim plotted to commit some kind of attack, and ordered three large knives on Amazon.com a week before he was confronted by the anti-terrorism task force that had him under 24-hour surveillance.

The FBI said police confronted Rahim after he told his nephew, David Wright, in a telephone conversation they were monitoring on Tuesday that he had changed his mind about beheading an out-of-state victim and instead planned to kill local police officers either Tuesday or Wednesday.

“Yeah, I’m going to be on vacation right here in Massachusetts,” Rahim allegedly said. “I’m just going to, ah, go after them, those boys in blue.”

An FBI affidavit supporting a criminal complaint against Wright said “going on vacation” was their code for committing violent jihad.

Wright, meanwhile, was recorded saying something about “thinking with your head on your chest,” the FBI said, explaining that this was a reference to the beheadings shown in Islamic State propaganda videos.

Nowhere in the evidence made public thus far in this case does either man actually say the word “beheading.”