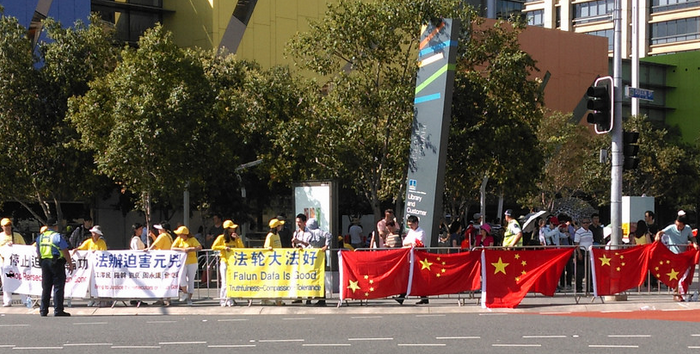 Chinese students leave their flags [one upside down] on the fence while they sit in the shade some distance away, on Saturday Nov. 15, 2014. After a large number of students tried to cover the Falun Gong banners and practitioners with the red flags the police instructed the Chinese students and their flags to move to the opposite side of the road. (Courtesy of Bethany Liu)
Asia & Pacific

BRISBANE—While some have criticized Queensland police for an excessive show of strength over the G20 weekend, innovations in community engagement received high praise.

According to John Andress, spokesperson for Falun Gong spiritual group in Queensland, each group registered to protest during the G20 were assigned a “specialist”, a member of the police force who was part of prior negotiations, who were across their needs and who remained imbedded with the group throughout the proceedings.

Charged with looking out for unwanted trouble, the specialist assigned to the Falun Gong proved invaluable when Chinese students overwhelmed a group of practitioners holding banners at the entrance to Victoria Bridge.

Most of the leaders would have driven past the banners on their way to the G20 venue (except for Chinese leader Xi Jinping, who took a separate route to avoid facing the truth of Falun Gong’s persecution in China, but also missed the Chinese supporters the Chinese Consulate paid to be there). According to Andress, on Saturday, the students put Chinese flags over practitioners who were holding banners to block them from view. The students simply tied their flags to the barriers and sat in the shade all day as practitioners stood in the sun for 10 hours holding their banners and passing out literature.

Andress said on Sunday, Chinese students again tried to block banners going up and tied flags to the barriers. But this time the police intervened and told the Chinese they had to remove their flags and go across the road. They initially refused and argued for around 10 minutes, but the police commander in charge of that site ordered them to move their flags, which they begrudgingly did. Later, the police checked the papers of all the Chinese students, which seemed to really scare them as they all left shortly afterwards.

“Paul [the police specialist] said to us we have negotiated with you for weeks about areas to hold banners. We signed off and you signed off on those areas, so that is your corner all day,” Andress told Epoch Times.

Andress praised the police for their help and professionalism.