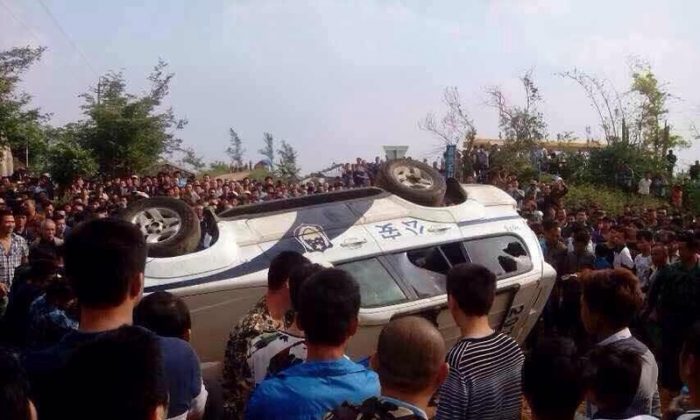 Police Clash With 10,000 Seeking to Stop Construction of Medical Center in Southern China

According to eyewitnesses, a violent crackdown on a protest on Nov. 18 against a new medical facility in the capital of China’s Hainan Province provoked a violent response by the protesters. Over 10 law enforcement vehicles were smashed and turned over, and close to 100 protesters are said to have been injured.

On the morning of Nov. 18, thousands of residents gathered to protest at the construction site of a large center for treating patients of skin diseases, sexually transmitted diseases, tuberculosis, and leprosy, in the town of Sanjiang in the city of Haikou, the capital of the island province of Hainan.

Although the state-funded project promises that it has the capacity for sewage treatment and environmental assessment, many of the local residents have no trust in the state’s promises and fear medical pollution and the spread of disease.

State-run media and eyewitnesses provide different accounts of what happened after the protesters arrived.

The state-run media reported that after protesters tried to break down the walls of the construction site, they clashed with police, injuring five law enforcement officials, one policeman, and two protesters.

The state-run media reported protesters smashed 10 law enforcement vehicles and showed a video taken by a policeman with a cell phone of outraged villagers chasing and throwing stones at the police. The local officials have requested public security to enforce strict punishment on protesters who acted violently.

According to local eyewitnesses, the protesters only moved to tear down the wall of the constructions site hours after police attacked them.

A local villager who only reveals her surname as Han indicated that over 1000 police and riot police started to attack and arrest protesters at around 6 a.m. on Nov. 18. “[Police] even beat the elderly, children, and women.” Mrs. Han said to Epoch Times in a phone interview.

At around 9 a.m., protesters started to destroy the wall of the construction site, and the police fired tear gas and rubber bullets at the protesters, according to local eyewitnesses.

“A good friend of mine rushed to the front. A riot policeman took out a gun and shot him in the head with a rubber bullet. [My friend] fell on to the ground immediately and stopped moving,” Mr. Shen, who told Epoch Times in a phone interview that he witnessed the clash between police and protesters. Mr. Shen said his friend is still in critical condition in the hospital.

The violent crackdown by the police attracted more local residents to join the protest, with over 10,000 people gathering at the construction site in the afternoon, including young middle school students.

As more and more police were dispatched to the site to violently suppress the protesters, protesters started to smash the police vehicles and turn them upside down, Mr. Shen said.

Photos show at least three different groups of police were at the site, including police wearing helmets and holding shields and batons, armed police in camouflage suits, and regular public security.

Nearly 100 residents were injured, and over 20 were arrested by police, local eyewitnesses say. Mr. Shen said the town hospital is filled with injured residents from the clash.

The incident is not over yet, and policemen continue to arrest more people involved in the protest.

“Now, our internet is censored. If our [residents] online posts get forwarded over 500 times, the police arrest the people who post them.” Mrs. Han said.

The Haikou city government stated after the incident that the construction will not continue before reaching a consensus with local residents, according to state-run news.