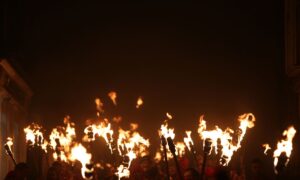 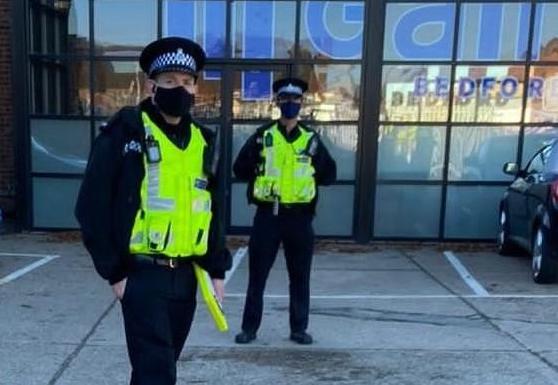 Bedford police officers attend a gym which they say was in breach of lockdown regulations on Nov. 5, 2020. (Bedford Police)
UK

Police in England have been clamping down on gym owners who opened up in public defiance of England lockdown laws.

In Essex, the owner of Ripped Gym who declared her intention to remain open on social media was arrested yesterday and then charged with failing to comply with directions to close. She is due in court today.

Another gym in neighboring Bedford, Gainz Fitness, also declared publically their intention to remain open. The owner was served with a prohibition notice, according to Bedford Police.

Video footage of the owner of Ripped Gym in Harlow, Michelle Meade, showed the moment she was arrested after at least five police officers attended the gym yesterday morning, several hours after they had opened.

In the footage, Meade can be heard to invoke what she says is a “common law” defense that allows her to earn a living.

Essex police said in a statement, “After attempts to engage with the owner failed, she was arrested and subsequently charged with failing to comply with a direction to close premises under the Coronavirus Act 2020.”

In a now-deleted previous statement, the police said that ten fixed penalty notices had been handed to people in the gym.

Ripped Gym said in an earlier statement that staying open was “not about the money.”

“If I dont [sic] stand up for what I believe in, what’s the point of being alive,” said a post yesterday on the Ripped Gym Facebook page.

In Liverpool last month, some gym owners defied the dictate to close down as the city became the first to be put under Tier 3 rules.

Many gym owners are angry at the decision to shut down their businesses under the new lockdown rules, which only allow outdoor exercise.

Gym and leisure bosses challenged the government ahead of the decision.

The approach of cutting out a means of exercise is “regressive,” according to Humphrey Cobbold, chief executive officer of PureGym, one of the largest gym companies in the country.

“COVID-19 does not transmit in gyms, which have a vital role to play in promoting physical and mental wellbeing and employ hundreds of thousands of people,” Cobbold said in a statement.

He cited industry research that he said showed there was an average of only 2.88 cases of the CCP (Chinese Communist Party) virus per 100,000 gym visits during the second week of October.

Other leading figures and companies in the industry, such as Anytime Fitness, are making similar pleas.

The government refused to water down the restrictions, even for exceptions on outdoor sports such as tennis.

Quizzed on the issue earlier this week by MPs, Boris Johnson said, “I must apologise to my honourable friend for not being able to offer the House a huge list of exemptions to the rules that we are setting out, because once you unpick at one thing, alas, the effectiveness of the whole package is compromised.

“That’s why I want everyone to work together for the next four weeks to get the R [transmission rate] under control so we can open things up again in time for December.”