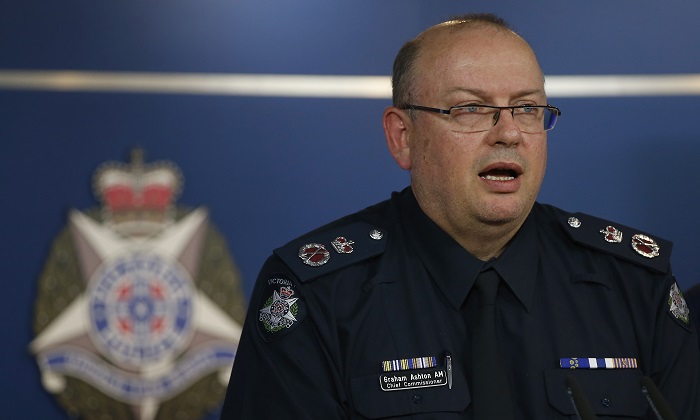 Victoria’s top policeman has rubbished claims that Melbourne isn’t a safe place and said there is no so-called African gang crime crisis in the city.

Police chief Graham Ashton told the press on Wednesday, Jan. 10, the issue of crime among youths of African appearance has been blown out of proportion and the state is one of the safest in the world.

“I’ve heard people say that Victoria is not a safe place to live, that’s complete and utter garbage,” Ashton said reported The Age.

Victoria is one of the safest places in the world to live, he said.

Victoria's Chief Police Commissioner has denied there's an African gang crisis, as he announced the formation of a community taskforce to end the violence. #7News pic.twitter.com/up6VzAGoJk

His remarks also follow those made by federal politicians who voiced their concerns over the issue, including those made by Prime Minister Malcolm Turnbull.

The federal government was “very concerned about the growing gang violence and lawlessness in Victoria,” particularly in Melbourne, Turnbull told media on Jan. 1, reported the ABC.

Federal MP Greg Hunt similarly said African gang crime was “out of control” in Melbourne while Home Affairs Minister Peter Dutton told a Sydney radio station that “African gang violence” had made people too “scared to go out to restaurants.”

Ashton told the press his comments were not a response to those made by politicians and he did not want to enter the ongoing political debate over the issue.

The Prime Minister has weighed in to the debate over youth crime in Melbourne, declaring there is a gang problem and it's the Premier's fault. @EstelleGriepink #7News pic.twitter.com/Q0LFW2PNXG

The ABC reported that Ashton recognized that people were worried by what they had seen on media coverage of the issue but he said the crime rate in the state was, in reality, going down.

“I don’t think it’s a crisis … I think if you put it into context you’ve got a few hundred offenders engaging in offending in a city of 4.5 million people,” he said.

“If you look across the totality of the Victorian crime situation, the last two quarters we’ve reduced total crime in the state. We’re continuing to do that,” said Ashton.

But Ashton’s comments have upset some of those who have been affected by the crimes, which have mainly occurred in Melbourne’s west.

Police will be investigating death threats against members of the African community after a new taskforce was established to tackle youth crime. @CGreenbank9 #9News pic.twitter.com/VUkZuyVCkS

Luke Mitchell, a resident of an estate in the city’s west that had its community center trashed by gangs of youth over an eight-month period, told The Australian that people in suburbs are frightened.

“The reality is that the crisis isn’t playing out in shops or restaurants or the center of the city; it’s in the streets in ­suburbs around western Melbourne, it’s in the parks, it’s in the unmanned buildings that people don’t want to go into,” Mitchell said.

Young men, reported by media to be South Sudanese born and others, hijacked the estate’s privately owned facility and used it day and night. Images of the center published by the media show the center has been trashed inside and out with litter everywhere, holes in walls, and graffiti covering both the exterior and interior.

A petition from the estate’s residents that began on Saturday has called for urgent government action to strengthen penalties and tighten bail laws.

Petition founder Arnav Sati told The Australian that Ashton’s comments proved police and some politicians are in a “state of denial” about the severity of the problem.

“OK, the 99 percent across the state are fine, but the 1 percent who have to deal with it are very, very scared by what they’ve seen or put up within their neighborhoods,” Sati said.

When Ashton was speaking with the press on Wednesday he did so with leaders of Melbourne’s African community who have been also affected by what has occurred.

As an example, Ashton said that death threats have made against innocent members of the African community.

“We know that the vast majority of African-Australians in Victoria are decent, law-abiding people,” Ashton said.

“They are suffering as a result of the actions of a small cohort of young offenders. The African-Australian community can, and want to, play a role in providing solutions,” he said.

Wednesday’s media event was also used to announce how police have established a community taskforce with African-Australian leaders to tackle youth crime in the city.