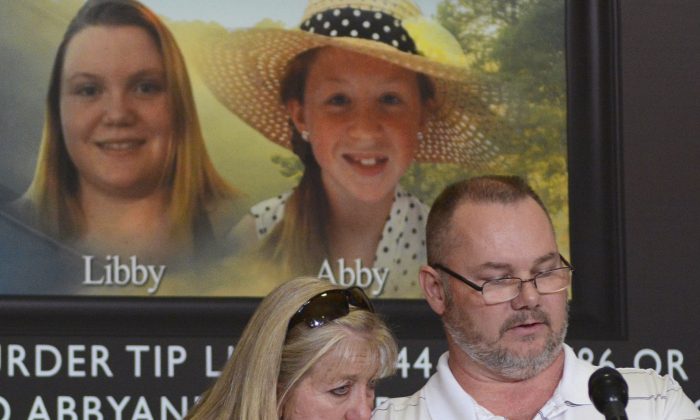 Grandparents of victim Libby German, Becky Patty (L) and her husband Mike Patty during a news conference for the latest updates on the investigation of the double homicide of Liberty German and Abigail Williams at Carroll County Courthouse in Delphi, Ind., on March 9, 2017. Kyle Keener/The Pharos-Tribune via AP)
Crime and Incidents

Police Chasing 1,000s of Tips in Killing of 2 Indiana Teens

INDIANAPOLIS—Police investigating the killing of two teenage girls in northwestern Indiana say they have interviewed more than 300 people and are following up on thousands of tips.

Fourteen-year-old Liberty German and 13-year-old Abigail Williams vanished Feb. 13 while hiking near Delphi, about 60 miles northwest of Indianapolis. Their bodies were found the next day in a wooded area.

State Police Sgt. Kim Riley said Tuesday that authorities have cleared more than 200 people identified as resembling a man shown in two grainy photos taken from one of the girl’s cellphones.

But Riley says investigators are still following up on tips about roughly another 100 people and that authorities are still getting about 200 new tips a day in the investigation.