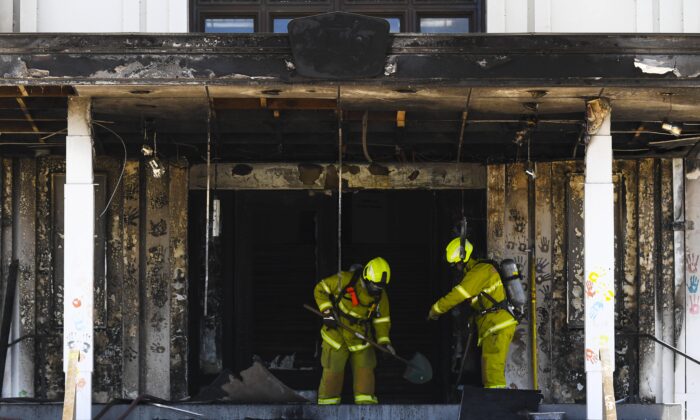 A 30-year-old Victorian man has been charged with arson in relation to a fire at Canberra’s Old Parliament House.

Police allege the fire, which occurred during a protest last week, was deliberately lit. They have also charged the man with damaging Commonwealth property.

He is due to face the ACT Magistrates Court on Tuesday.

Three other arrests were made by ACT Policing on Saturday, and the individuals faced court on Sunday.

Two were charged with assaulting a frontline service provider, and the third was charged with hindering a territory official.

The confirmation of the charges came on the same day police arrested a man outside Old Parliament House for trespassing.

Social media footage shows the man being detained by police on Monday.

The 30-minute live stream shows protesters with chains around their hands. A man is also seen holding a shovel with burning coals when speaking to an officer and asks if protestors can undertake a smoking ceremony outside Old Parliament House.

A police officer is seen telling the protesters police were happy for a smoking ceremony to proceed but that the ceremony could not be done near the building, which currently is closed after the damage caused by the fire.

Old Parliament House was closed after the front doors of the heritage-listed building were burnt, causing potentially irreparable damage.

Police confirmed officials had agreed a small smoking ceremony could take place as part of a peaceful protest but said it got “a little bit out of hand.”

Investigations continue into the fire as Australian Federal Police and ACT Policing work to identify other people involved in the fire.