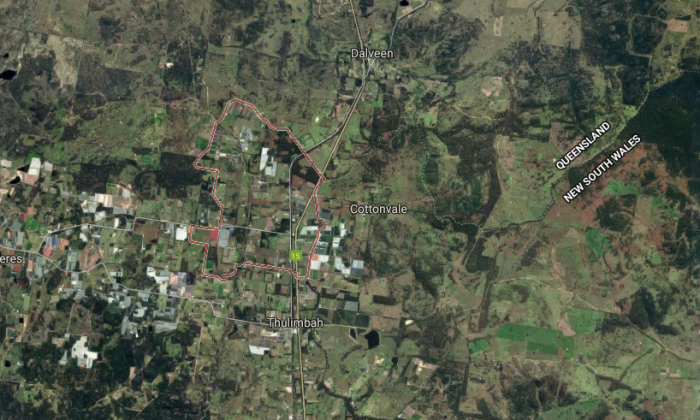 A 5-year-old boy was accidentally shot in the face at a rural property in Cottonvale in Queensland, Australia. (Screenshot via Google Maps)
Australia

The father and grandfather of a young boy who was accidentally shot in the face on a rural property in Queensland in January have been charged by police.

Cameron Calvisi, 5, was at a property in Cottonvale just north of the Queensland and New South Wales border when his 12-year-old cousin got hold of an unsecured loaded .22 rifle and unintentionally shot him in the face on Jan. 5, reported Fairfax.

The 5-year-old boy was airlifted to Lady Cilento Children’s Hospital where he underwent emergency surgery to remove the bullet from his jaw. The bullet had entered from his right cheek and stopped just millimetres short of severing the boy’s spine, reported The West Australian.

The boy’s grandfather told Fairfax that he had been out on the family’s property hunting pests and accidentally left the gun in the property’s shed during a storm instead of putting it away properly. It took “only a few minutes” for the cousin to get to the gun.

“He played with something he shouldn’t have played with,” Tony Calvisi told the newspaper.

“They were in the old main shed. The gun was stored in an area where he shouldn’t have touched it.

More on charges being laid against the father and grandfather of little Cameron Calvisi: https://t.co/putSA85R6M

“He’s old enough and been told never to touch anything but I don’t know why he even went there,” he added.

Cameron was released from the hospital at the end of last month, reported the newspaper.

Both men are scheduled to appear in the Warwick Magistrates Court on March 28.