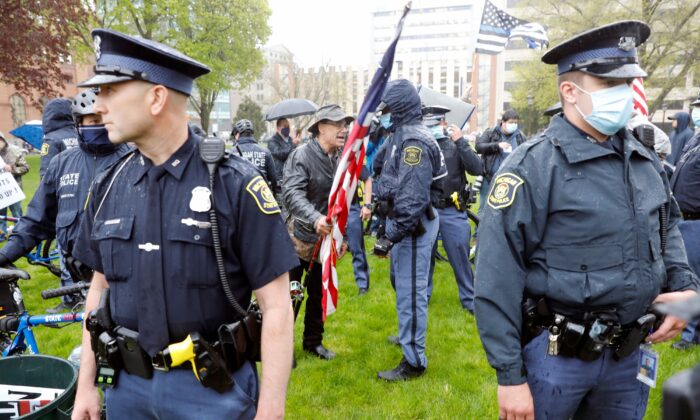 Michigan State Police patrol as demonstrators protest in Lansing, Michigan, on May 14, 2020. (Jeff Kowalsky/AFP via Getty Images)
US News

Police departments nationwide are grappling with changes the CCP virus has wrought on the way they operate, even as law enforcement agencies report major decreases in crime due to stay-at-home orders.

Officers are facing more risks to their lives as they attend to calls, investigate, and patrol in the streets. They are also required to change their ways of policing and investigating as social distancing and masks changed everything about the way they operate.

There are many sporadic reports from around the country—a Lexington police officer in Holmes County, Mississippi, was shot at by three men and two patrol cars were damaged when police responded to a social distancing violation on May 7.

In another recent incident in Hilltown township in Bucks County, Pennsylvania, an accused rapist who was set free from jail due to the pandemic set off fireworks at officers before setting his house on fire on Tuesday.

As the country slowly tries to limp back to what it was before the pandemic, with empty streets and business predominantly still under lockdown, Pinal County Sheriff Mark Lamb told The Epoch Times that while everybody is looking at the public health issues arising out of the pandemic, his officers deal with the public safety issues that involve greater risks.

“What about the people who are home, who are out of money, who are stressed, bills stacking up, and worse, responding to domestic violence calls, the neighbor problems, to a suicidal subject. And we’re putting my deputies at risk, far greater risk of responding to those calls,” said Sheriff Lamb. “The intensity of those calls has been elevated.”

Cold cases are getting colder. Detectives are struggling to connect with victims through thick masks, and investigators accustomed to wearing plainclothes are digging out their dusty uniforms for patrol duty as the CCP virus pandemic rages.

“As far as investigations go, your cases are getting colder,” James Dudley, retired Deputy Chief of the San Francisco Police Department, told The Epoch Times, adding that many investigations depend upon building relationships and establishing rapport, which is not happening like before.

He said things that use to happen in-person are now happening over the phone. “As an investigator, I always slip to the scene, I always search beyond the cursory search or search that patrol officer didn’t pick something that happened that night,” said Dudley. “A lot of those things cease to be.”

Dudley also mentioned that the pandemic has limited the police’s outreach with the community. “Any community policing effort, any effort to get closer to the community, help the community to reach out to children and the elderly. Now we change distances. We don’t do that,”  he said.

The Snohomish County Sheriff’s Office in Washington state told The Epoch Times in an email that it’s outreach with the community has mostly moved on to social media where it informs the community about the crisis resources available online during the pandemic.

These resources include a care crisis line, a care crisis chat, and a toll-free number for finding food, paying for housing bills, accessing free childcare, or other essential services.

When asked how policing has changed in the county, the spokesperson said: “Our deputies implemented many safety procedures to follow CDC guidelines, including wearing PPE, using online reporting when possible, disinfecting uniforms, clipboards, pens, etc.”

Authorities say though crime has decreased and ways of policing have changed, enough wrongdoing still abounds to keep police busy, and detective work must still be in-person and hands-on, despite COVID-19. Evidence has to be collected, statements must be taken in person and death notifications need to be made face-to-face.

“You put on gloves and you put on masks and you’ve still got to go out there and do it,” said Los Angeles Police Capt. Jonathan Tippet, head of the elite Robbery-Homicide Division.

Police around the country have to put some investigations on hold as they detail detectives to help out with social distance patrols or cover for their colleagues out sick with COVID-19.

“I would always go back in the day to get a different perspective, though, a lot of those things have ceased to be because the officers that are working investigations are working high priority cases,” he said.

It’s worrisome to former New York Police Department Sgt. Joe Giacalone, who is concerned about criminals across the country who will go undetected in the meantime.

“That becomes a bigger problem down the road,” Giacalone, a former cold case detective who is now a professor at the John Jay College of Criminal Justice. “Investigators prevent further victimization by getting these guys off the streets.”

Despite fewer detectives in bureaus, police are finding workarounds and high-profile cases are still getting the necessary attention. The Los Angeles district attorney filed an additional sexual assault charge against disgraced film mogul Harvey Weinstein in April, and investigators in New York continue to delve into an unsolved Long Island serial killer case after they revealed new evidence earlier this year.

Risks of Being at the Frontlines

Being at the frontline during the pandemic makes law enforcement personnel extremely vulnerable to catching the virus. The NYPD COVID-19 Memorial listed 41 officers who lost their lives to the pandemic as of Wednesday.

He said police have to do less on the field during the pandemic because under the lockdown a lot of live police response is replaced by interviews on the telephone and electronic reporting.

“So in theory, you would have less calls for service but the ones that you do, you’re more likely to have contact with offenders or individuals,” he said.

Officer Down Memorial Page (ODMP), a charity dedicated to honoring fallen American law enforcement officers, reported a 38 percent increase in the line of duty deaths during April over the same time last year—out of the 32 law enforcement officers who lost their lives in the country in April, 23 died after contacting COVID-19 on duty.

PRESS RELEASE – 5/11/2020 It is with deep regret and sorrow that I, Chief Sheila Byron-Lagattuta and the entire Glen…

A compilation of reports on Monday from around the country by PoliceOne listed 50 media reports of such deaths. Reporting on such cases is difficult as the ODMP said, “it often takes much longer than normal to make a line of duty death determination due to illnesses such as COVID-19.”

This story has been updated with additional details.