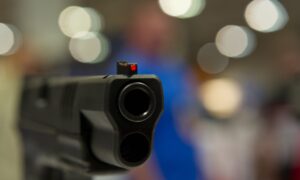 An officer was pepper-sprayed and at least one police vehicle was damaged by a group of people protesting over the death of a man who perished as a result of a police-involved shooting in Portland, Oregon, officials said.

Police received a call on Thursday evening to perform a welfare check on a white male reported to be wearing all black in a motel.

When authorities arrived, they found the man, and a shooting took place.

The man was then taken to a hospital and passed away in spite of life-saving efforts, police said.

“We are early in this investigation. Preliminary information suggests our officer encountered a very difficult and dynamic situation that no officer wants to face,” said Chief Chuck Lovell, who was on the scene.

“I want to thank all our members who responded to the scene as well as those who were out taking emergency calls in the city. I’m thankful and proud of their efforts.”

After the incident, a group of protestors gathered at the scene and interfered with the authorities. They threw objects and yelled at the officers. One officer had her baton grabbed and pulled toward the crowd, but the situation was averted by other officers.

One of the protestors pepper-sprayed an officer and at least one police vehicle had its tires punctured and a window broken.

Officers from all over the city were called on to help with the chaos.

Portland police stated on their Twitter page that some of the information being spread online was not true.

As officers were attempting to clear the scene, members of a hostile crowd flattened tires and broke windows on a patrol vehicle. pic.twitter.com/ot3Ncq9zwI

“There is erroneous information being circulated on social media regarding the officer-involved shooting in the Lloyd district,” police wrote.

“We can confirm that the subject involved is an adult white male. No one else was injured. We are in the early stages of the investigation. PPB (Portland Police Bureau) appreciates the community’s patience as we gather information.”

Police didn’t specify if any arrests were made.

Authorities further stated that they would release the name of the involved police officer tomorrow, as per their policy, adding that he will be on paid administrative leave until the Bureau and Multnomah County District Attorney Office conclude their investigation.