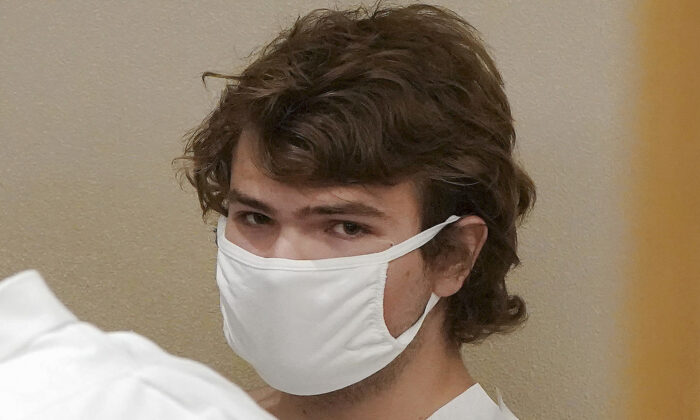 Payton Gendron appears during his arraignment in Buffalo City Court in Buffalo, N.Y., on May 14, 2022. (Mark Mulville/The Buffalo News via AP)
Crime and Incidents

Police: Buffalo Shooter Aimed to Keep Killing If He Got Away

BUFFALO, N.Y.—The suspect accused of killing 10 black people in a shooting at a Buffalo supermarket planned to keep killing if he had escaped the scene, the police commissioner said Monday, as the possibility of federal hate crime or domestic terror charges loomed.

The gunman, who had crossed the state to target people at the Tops Friendly Market, had talked about shooting up another store as well, Buffalo Police Commissioner Joseph Gramaglia told CNN.

“He was going to get in his car and continue to drive down Jefferson Avenue and continue doing the same thing,” the commissioner said.

The commissioner’s account was similar to portions of a 180-page document, purportedly written by Payton Gendron, that said the assault was intended to terrorize all nonwhite, non-Christian people and get them to leave the country. Federal authorities were working to confirm the document’s authenticity.

Gendron, 18, traveled about 200 miles from his home in Conklin, New York, to commit the attack, police said. Authorities said he wielded a rifle, wore body armor, and used a helmet camera to livestream the bloodbath on the internet.

Gendron surrendered to police who confronted him in the supermarket’s vestibule. He was arraigned on a murder charge over the weekend. He pleaded not guilty and was jailed under a suicide watch. Federal authorities are contemplating bringing hate crime charges.

Law enforcement officials said Sunday that New York State Police troopers had been called to Gendron’s high school last June for a report that the then-17-year-old had made threatening statements. The threat was “general” in nature and not related to race, Gramaglia said.

Gramaglia said Gendron had no further contact with law enforcement after a mental health evaluation that put him in a hospital for a day and a half.

It was unclear whether officials could have invoked New York’s “red flag” regulation, which lets law enforcement, school officials, and families ask a court to order the seizure of guns from people considered dangerous. Authorities would not say when Gendron acquired the weapons he had during the deadly attack.

Federal law bars people from owning guns if a judge has determined they have a “mental defect” or they have been forced into a mental institution. An evaluation alone would not trigger the prohibition.

At the White House, President Joe Biden, who planned a visit Tuesday to Buffalo, paid tribute to one of the victims, security guard and retired police officer Aaron Salter. Salter fired repeatedly at the attacker, striking his armor-plated vest at least once before being shot and killed. Biden said Salter “gave his life trying to save others.”

Authorities said that in addition to the 10 people killed, three people were wounded.

Gendron researched the neighborhood’s demographics and conducted reconnaissance before the attack, investigators said. Most of the victims were elders.