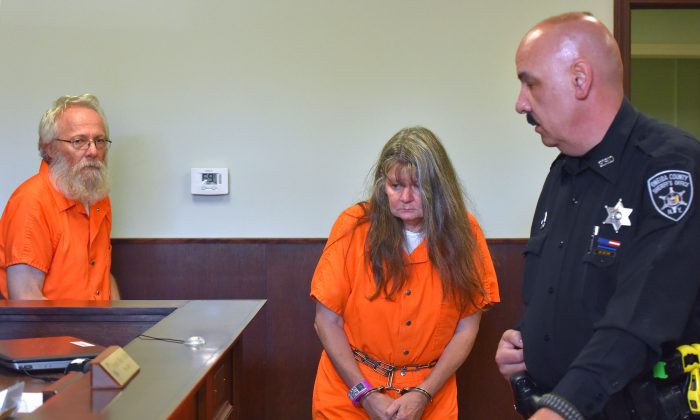 Bruce Leornard, left, and Deborah Leonard, center, enter the courtroom of before their arraignment, Tuesday, Oct. 13, 2015 in New Hartford, N.Y. The central New York couple have been charged with fatally beating their 19-year-old son inside a church, and four fellow church members have been charged with assault in an attack that also left the young man's brother severely injured, police said Tuesday. (Mark DiOrio/Observer-Dispatch via AP) ROME OUT; MANDATORY CREDIT
Crime and Incidents

Police: Brothers Were Beaten in Church to Make Them Confess

NEW HARTFORD, N.Y.— Two teenage brothers were brutally beaten in church — one of them fatally — in an effort by their parents, sister and other members of the congregation to force them to confess their sins and seek forgiveness, police said Wednesday.

Police Chief Michael Inserra said investigators are still looking into what the supposed sins were.

Lucas and Christopher Leonard, 19 and 17, were pounded with fists Sunday at the Word of Life Church when a “counseling session” meant to explore their spiritual state turned violent, Inserra said. They were beaten in the abdomen, genitals, back and thighs, authorities said.

Lucas died and his brother was hospitalized in serious condition. Six church members — including the brothers’ parents and sister — have been arrested.

“Both brothers were subjected to physical punishment over the course of several hours, in hopes that each would confess to prior sins and ask for forgiveness,” Inserra said.

The parents, Bruce and Deborah Leonard, were charged with manslaughter in Lucas’ death. Four other adults were charged with assault in the younger brother’s beating, including Sarah Ferguson, 33, the victims’ sister. All have pleaded not guilty.

Police: Brothers assaulted at Word of Life Church were being “punished” http://t.co/wSBomOegFs pic.twitter.com/IJVFMzBGBn

Lawyers for the parents and the sister had no comment. Contact information for the other defendants’ attorneys wasn’t immediately available.

The church is a former elementary school where a Christian congregation has worshipped for as many as 30 years.

Neighbors in the once-thriving mill town of 22,000 people about 50 miles east of Syracuse said the congregation’s secretive ways made them suspicious.

“I’m really afraid. In my heart I don’t think this is the first incident,” said Eva Monaghan, who lives around the corner from the church. “Over all the years, I can’t imagine this is the first thing. Maybe nothing as bad. Around town, it’s considered a cult.”

Police said more arrests are expected as the investigation continues.

The investigation began about 12:30 p.m. Monday when family members brought Lucas Leonard to a hospital, where he was pronounced dead. Police surrounded the church and entered it. Several children were turned over to child welfare authorities.

Nancy Kneller, who works at a Catholic church next door to Word of Life, described the congregation as a close-knit group.

“It’s really sad. I think that people have always been so suspicious. Why are they so secretive? Why are there no kids out playing?” she said. Still, she said, “I think they’re good people that made a bad decision.”