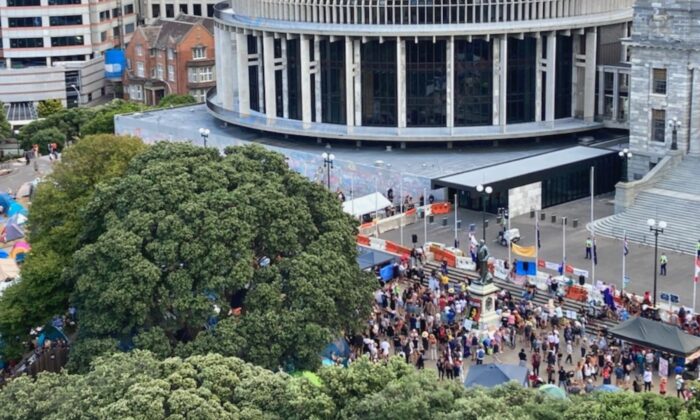 Anti-mandate protesters gather to demonstrate in front of the parliament building in Wellington, New Zealand, on Feb. 16, 2022. (Photo obtained by Reuters)
WORLD

A protest in New Zealand against COVID mandates that was inspired by the Canadian “Freedom Convoy” swelled in numbers on Feb. 16 on Parliament grounds in Wellington, authorities said.

“There has been an influx of protesters at Parliament today, including children. However, the crowd had been orderly,” Richard Chambers, an assistant police commissioner, said during a news conference.

“This is a very complex situation, and we are mindful of the tactics we need to take so that the situation is not escalated,” he said. Chambers estimated that about 450 vehicles were blocking the site.

Authorities have said they will begin towing cars to unblock roads around Wellington’s “Beehive” parliament if demonstrators don’t leave the area voluntarily. It’s now the ninth day that protesters have occupied Parliament grounds, with demonstrators starting to chant: “Whose streets? Our streets.”

Police had asked towing services earlier to help, but tow truck companies have said they don’t want to get involved because they sympathize with the anti-mandate protesters.

“There are different reasons being put forward, but the reason that the majority of my colleagues don’t want to put their tow trucks out there is because they’re sympathetic to what’s going on in Parliament,” Greg Cox, who owns Wellington’s Cox Heavy Truck Salvage, told local news agency NZ Herald.

New Zealand Police Commissioner Andrew Coster said officials have appealed for more assistance in removing the vehicles, including towing capabilities from the military.

“We have made a request to the New Zealand Defence Force for assistance with towing, and we are awaiting the outcome of that request,” Coster said, adding that authorities are “not seeking an escalation” and respect lawful protests, but the roads have to be cleared “so citizens can go about their daily lives safely.”

“We are engaging with protesters about the manner of the protest. But there has to be a line here—this can’t go on indefinitely,” he said.

Inspired by truckers’ demonstrations in Canada, protesters have blocked several roads around Wellington’s “Beehive” parliament for nine days with trucks, vans, and motorcycles, and camped out on the lawns in front of the distinctive building.

Police gave protesters an ultimatum on Feb. 15 to move out or officials would start towing and seizing vehicles. Chambers said on Feb. 16 that authorities have managed to make contact with leaders of the demonstration, and about a dozen vehicles have already moved voluntarily.

While the protest started as a stand against COVID-19 vaccine mandates, those demonstrators have been joined by groups calling for an end to pandemic restrictions as well some drawing attention to other social issues like censorship and rights of the ethnic Maori community.