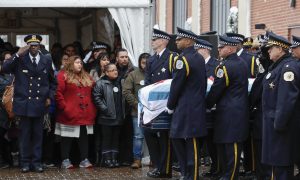 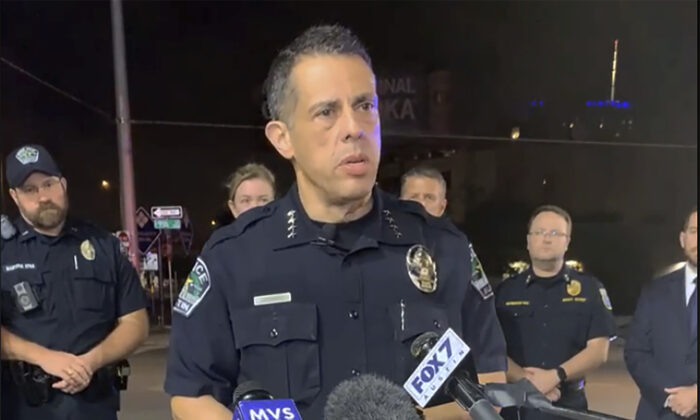 AUSTIN, Texas—Police have arrested one suspect and are searching for another after an exchange of gunfire between two individuals on a crowded downtown Austin street left 14 people wounded early Saturday, two of them critically.

The Austin Police Department said in a news release that the U.S. Marshals Lone Star Fugitive Task Force assisted in making the arrest, but it provided no other details other than to say it is continuing to follow up on leads for the other suspect still at large.

Interim Police Chief Joseph Chacon said the shooting happened around 1:30 a.m. on a street packed with bars and barricaded off from vehicle traffic. He said investigators believe it began as a dispute between two parties. Chacon said both suspects are male but declined to disclose details such as whether both fired shots, saying the investigation was ongoing.

“Most of the victims were innocent bystanders, but we’re still sorting out all of the victims to see what their involvement is in this case,” Chacon said.

The mass shooting—one of at least three in the U.S. overnight—sparked panic along 6th Street, a popular nightlife destination in the city that’s home to the University of Texas.

One witness, Matt Perlstein, told KXAN-TV that he was waiting with a friend to enter a bar when gunfire erupted.

“Everything was totally fine,” Perlstein said, then gunfire erupted. “We just heard like … a bunch of gunshots going off. Everyone got on the ground. We couldn’t even comprehend what was going on at the time.”

Chacon said his officers responded quickly to the area.

Because of the chaos on the barricaded street, police drove six of the wounded to hospitals in their squad cars. Ambulances transported four people and the other four made their own way to hospitals, he said.

Gov. Greg Abbott issued a statement thanking police and other first responders and offering prayers to the victims.

Abbott said the state Department of Public Safety is assisting in the investigation and Chacon said the FBI and the Bureau of Alcohol, Tobacco and Firearms were also assisting.