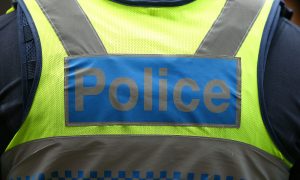 CANBERRA, Australia—A man who falsely claimed to have a bomb and menaced a woman with a knife forced the evacuation of Brisbane International Airport for more than two hours in an emergency that police described on Sunday, Feb. 3, as elaborate and terrifying.

Police ended the standoff late Saturday by shooting the 50-year-old man with non-lethal bean bag shotgun rounds and arresting him. There were no injuries reported, and police said the emergency was not related to terrorism.

Australia’s third busiest airport reported that the disruption had caused delays to arrivals and departures of up to three hours.

Brisbane Airport evacuated due to ‘major incident’ as man arrested

Australian Federal Police and Queensland Police have confirmed they are dealing with an “emergency situation” at the international terminal in Brisbane, Australia pic.twitter.com/7WigjjpfcA

The incident began in the terminal’s food court when the man pulled a knife on a screaming woman and placed a fake bomb on a table. Hundreds of panicked travelers fled the scene.

“It was a blood-curdling little scream, and she just bolted across the forecourt,” a man, who was not identified, told Nine Network television.

Another man, who also was not identified, told Nine: “He had one knife to start with, then when he looped back around he pulled out a second knife.”

“They were big carving knife-like things. There weren’t normal little knives, they were big,” the same witness added.

A woman, who was not identified, told Nine that the sound of the woman screaming sent people running. Somebody yelled that a man was armed with a knife or gun, she said.

“I just grabbed my kids, and I just ran out the door,” she said.

The man’s first language was Arabic and an Arabic-speaking police officer was at the scene within minutes to negotiate, Police Commissioner Ian Stewart said.

The man had gone to extraordinary lengths “to create a perception of risk, threat and fear,” Stewart said.

Police opened fire with bean bag rounds after the man claimed to have a bomb, Police Detective Superintendent Tony Fleming said. He was arrested soon after.

“His behavior elevated such that they were quite concerned about him, and some bean bag rounds were discharged and they struck him in the torso,” Fleming told reporters.

The man, from Gold Coast city near Brisbane, was examined by paramedics and had “no significant injuries,” Fleming said.

But Assistant Police Commissioner Peter Crawford said the man suffered a “health issue” on Sunday and was taken to a hospital where he was charged with offenses including contravening a restraining order and stalking with a weapon.

The most serious charge was threatening to destroy an aviation facility, which carries a potential sentence of 10 years in prison.

He has not been publicly named and will appear in a Brisbane court on Monday.

“I have absolutely no doubt that was a terrifying experience for members of the public that saw that,” Crawford said. “The alleged behaviors … what he was saying, what he was doing was certainly terrifying.”

Crawford said the man’s statements led police to search a number of premises and vehicles for improvised explosive devices. Stewart said more than one fake device had been found and all were inert.

Police locked down the airport for more than two hours and halted airport train services.