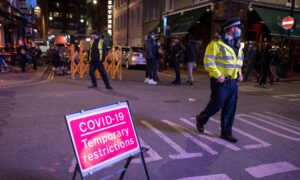 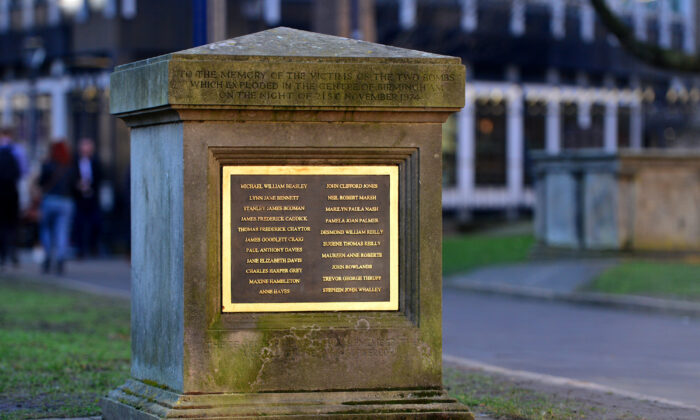 A memorial to the victims of the Birmingham Bombing is seen in St. Philip's Cathedral square on Feb. 25, 2019 in Birmingham, England. (Anthony Devlin/Getty Images)
UK

Police said they have arrested a man in Belfast under the Terrorism Act in connection with the 1974 Birmingham pub bombings.

West Midlands Police said that counter-terrorism officers arrested the 65-year-old man “in connection with enquiries into the murders of 21 people.”

A search of his home is being carried out, they said in a statement.

“Officers from Counter Terrorism Policing West Midlands CTU, working with colleagues from the Police Service of Northern Ireland, arrested a 65-year-old man at his home in Belfast today,” West Midlands Police said in a statement on Wednesday.

“He will be interviewed under caution at a police station in Northern Ireland.”

The arrest comes just three days before the 46-year anniversary of the twin bombs at the Mulberry Bush and Tavern in the Town pubs that injured 200 people on the night of Nov. 21, 1974.

A third bomb in another pub failed to detonate.

Julie Hambleton, whose 18-year-old sister died in the attacks, told the BBC that today’s arrest was “the most monumental event” since the convictions of the Birmingham Six were quashed in the appeals court 29 years ago.

She said she broke down in tears on hearing of the arrest.

The bombings caused the biggest loss of life on the British mainland during the 30 years of the troubles.

Families of those killed in the Birmingham bombs have long-campaigned for a clearer picture of what happened that night, and how police responded to the IRA’s phone call warning about the bombs.

An inquest last year concluded that the “inadequate” warning call from the Provisional IRA contributed to the deaths, with jurors finding no fault with the police response to the warning or to two alleged tip-offs.

The warning call was made to the local paper, the Birmingham Post and Mail, just seven minutes before the first blast. However, the description of the location did not mention pubs, causing delays.

It was payday and late-shopping night when the bombs exploded in the city centre pubs that were busy with young people.

Six men who later went on to be known as “the Birmingham six” were arrested on the night of the explosions and wrongfully convicted in 1975 for the bombings.

Hugh Callaghan, Paddy Hill, Gerard Hunter, Richard McIlkenny, William Power, and John Walker had their convictions quashed in the appeal court in 1991 and were released after 16 years in jail.