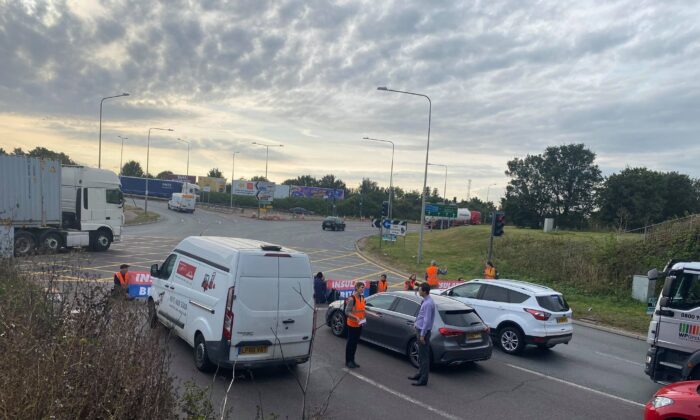 Police have arrested dozens of environmental protesters who blocked several junctions on the UK’s busiest motorway.

The protests—aimed at forcing the government to improve home insulation—at various chokepoints on the M25 caused long delays for tens of thousands of motorist.

Some motorists on the scene reacted angrily, with social media footage showing one attempting to drag a protester out of a blockade at the lights on a motorway roundabout—before police arrived.

At least 74 people were arrested.

However, it comes as a new policing bill, which aims to stymy precisely this kind of disruptive tactic, starts to make its way thorough Parliament.

A group named Insulate Britain said it was behind the motorway disruptions.

It describes itself as “a new group demanding that the government gets on with the job of insulating Britain’s homes.”

Its website warned that the disruption on Monday morning is “just the start,” and “action will continue until the government makes a meaningful commitment to insulate Britain’s 29 million leaky homes.”

Protests were staged at various locations around the M25, which circles London through various policing jurisdictions.

Surrey Police said they had arrested 34 people since the protests started during the morning rush hour.

“Protesters from Insulate Britain arrested on suspicion of public nuisance and wilful obstruction,” said Surrey Police in their latest update at around 2 p.m. “Both Surrey junctions of the M25 now reopened, thanks to motorists for their patience.”

There was disruption at at least four junctions, including one for Heathrow Airport Terminal 5, where 14 people were arrested by the Met Police. The junction is now open again.

Essex Police said 12 people were arrested at Junction 31 on suspicion of highways obstruction.

A further 14 people were arrested by Hertfordshire Police, according to the BBC, making a total of 74 arrests.

One supporter of the protesters, Liam Norton, a 36-year-old electrician from London, said, according to a statement on the group’s website:  “It’s a no brainer. Insulating Britain will reduce emissions, provide hundreds of thousands of jobs and stop our elderly dying in cold homes each winter.”

“As soon as a statement is made that we can trust and is meaningful, we will get off the roads.”

AA President Edmund King said: “This action is not only incredibly dangerous in potentially putting lives at risk but it also backfires in environmental terms by causing more delays and more vehicle emissions.

“These are some of the busiest sections of the M25 where tens of thousands of drivers will have been affected and has a negative knock-on effect on economic activity.”