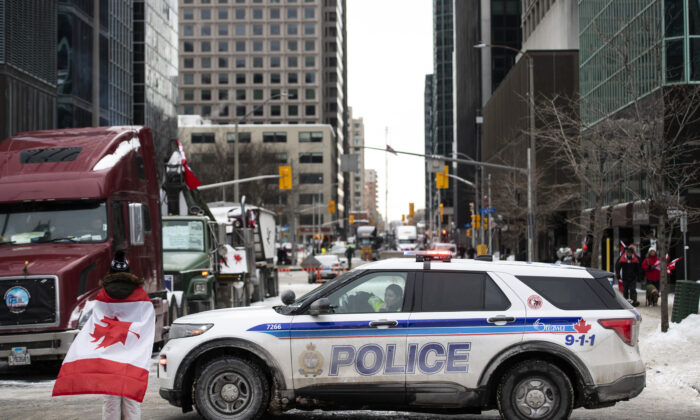 An Ottawa Police vehicle blocks off Kent Street in front of parked trucks as a protest against COVID-19 restrictions that has been marked by gridlock and the sound of truck horns continues into its second week, in Ottawa, on Sunday, Feb. 6, 2022. THE CANADIAN PRESS/Justin Tang
Canada

A lawyer representing a 78-year-old man arrested and ticketed by the Ottawa police for honking his horn in support of the truckers’ protest says the man has been “bruised, cut, and psychologically traumatized.”

On Feb. 6, Gerry Charlebois drove to the area close to the truckers’ Freedom Convoy protests when he was pulled over by the police at Besserer Street and Friel Street, after he honked his horn.

A video shared on Twitter shows Charlebois retrieving his wallet from the back of his vehicle and looking through it. After Charlebois closes his wallet without retrieving any ID card, a police officer twists his arm to bring it behind his body, and brings him to the ground.

David Anber, a criminal lawyer who is representing Charlebois, said this action by the police had cut and bruised his client in the process.

“The conduct was egregious. It left him bruised, cut, traumatized psychologically as well from the experience,” Anber told The Epoch Times.

The Epoch Times reached out to the Ottawa Police Service for comment but didn’t received a response.

I can advise, with consent, that I now represent the elderly man you’ve seen in videos like the one below, in respect of the Provincial Offence notice he received. My office will be vigorously fighting the charge starting with what appears to be an unlawful arrest. pic.twitter.com/wp6EHamu3b

The police then arrested Charlebois on the charge that he failed to identify himself, and gave him a ticket of $110 for allegedly making “unnecessary noise,” Anber said.

Anber says the arrest is “unlawful.”

“The question of the lawfulness of the arrest is almost certainly an indisputable question,” he said.

Anber said the police are not allowed to arrest an individual for failing to provide a driver’s license. The police may do so when they have also asked the person for a verbal identification but were refused.

“But the officer didn’t do that, and likely knew the guy’s name, so to me this is unquestionably an unlawful arrest,” he said.

Anber said he will be fighting the ticket and the charges Charlebois received, but will also refer his client to receive civil council on pursuing legal action against the City of Ottawa, the Ottawa Police Service, or the particular police officer who made the arrest.

On Feb. 7, the Ontario Superior Court granted a 10-day injunction to stop truckers participating in the Freedom Convoy in downtown Ottawa from honking their horns, after a proposed class-action lawsuit was filed against the convoy organizers on behalf of a local resident who said the honking of horns has resulted in her losing sleep and other mental damages.

As of Feb. 10, more than 1,500 tickets in relation to the protests have been issued for excessive noise, among other reasons, the Ottawa Police said in a statement.

The trucker convoy encamped in Ottawa began as a protest against the federal government’s COVID-19 vaccination mandate for all truck drivers crossing the Canada-U.S. border. It soon evolved into a national movement, attracting supporters from across Canada who also want to see an end to other pandemic-related mandates and restrictions. It has also sparked similar protests around the world.

Anber said Charlebois’s arrest also raises the question of whether the bylaw is allowed to override Canadians’ constitutionally protected right to freedom of expression—an issue he said will be “hotly debated” in court.

“There’s a lot of protest going on about government mandates. And so, whether or not this even could be an offence in the circumstances is something that will also have to be addressed,” Anber said.