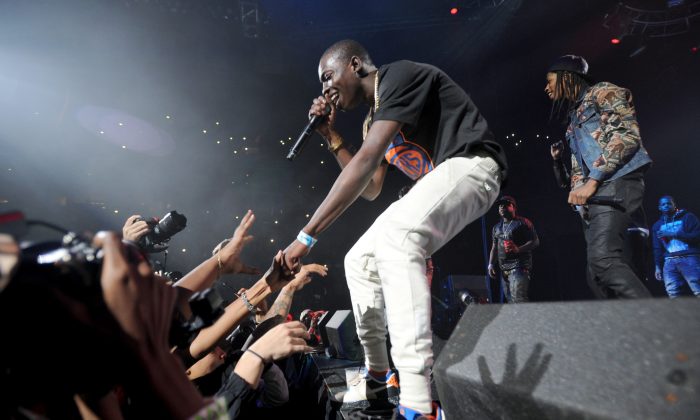 Rapper Bobby Shmurda performs on stage at Barclays Center of Brooklyn on Oct. 30. Shmurda was recently arrested on guns and drugs charges. (Bryan Bedder/Getty Images for Power 105.1)
Crime and Incidents

NEW YORK—Fifteen gang members, part of a sub-section of the famed Crips, were arrested and indicted on 69 counts, police announced Thursday. City police also seized 21 guns as part of the investigation.

The fifteen were part of the “GS9,” also referred to as “G Stone Crips,” based in East Flatbush, Brooklyn. Members of the gang typically ranged from ages 18 to 25.

After numerous shootings in public places between GS9 and rival gangs in the city and in Miami, Florida, police finally caught the fifteen, in an investigation that involved “all these little facts stitched together,” said Bridget Brennan, special narcotics prosecutor.

Early Wednesday morning, police arrested eight members outside Quad Recording Studios, where several of the gang recorded their music as rappers. Five others were arrested at the same time in other parts of the city, and two others were taken into custody outside of New York.

Several of the members had also been part of a rap group under the name GS9, including Ackquille Pollard, who performs as “Bobby Shmurda” and is also known as “Chewy,” and Chad Marshall, who went by the name “Rowdy Rebel.”

The gang had operated around East 95th Street from Kings Highway to East New York Avenue in East Flatbush. They bought guns with money obtained through crack cocaine sales. As violence with rival gangs surged, members had been plotting to shoot them in retaliation, including members of a gang that went by the acronym “BMW,” which stands for Brooklyn’s Most Wanted.

The 69 indictment counts include charges of conspiracy, murder, attempted murder, assault, criminal use of a firearm, and narcotics sales, etc.

On Feb. 8 last year, a 19-year-old member of Brooklyn’s Most Wanted was shot dead allegedly by Rashid Derissant, a GS9 member, inside a bodega. Derissant had been accompanied by another GS9 member, Alex Crandon, and both face charges of unplanned murder and attempted murder.

The murder was the culmination of a series of violent clashes between the two gangs, including a shooting outside the Kings County Supreme Court Building in Brooklyn.

In a separate incident, on July 12 this year, a 22-year-old female bystander was caught between the two gangs and shot in the neck in Brooklyn by a bullet meant for the rival BMW gang. Derissant also accidentally shot Crandon in the shoulder.

Bratton said it was a “difficult investigation put together and woven together.” It involved a lot of police work to interview witnesses, review surveillance videos, compare DNA test results, and conduct ballistics tests.

In one instance, two members participated in a car shooting and then performed as rappers at Barclays Center right after while wearing the same clothes. Police were then able to identify the suspects through video footage.

Ironically, Bobby Shmurda had documented the gang’s crimes and exploits in his rap song, said police.

Although the music had not served as court evidence, “it definitely pointed us in the right direction,” said Chief James Essig, of Brooklyn North Patrol. “He chronicled what they were doing on the street.”

Bratton said that the whole case “points out the very insidious nature” of rap music. Those who purchase and listen to rap are celebrating the lifestyle of gangsters, he added.

“Shame on us, shame on them,” he said. “These are bad people … mindless thugs. Life has no meaning to them.”