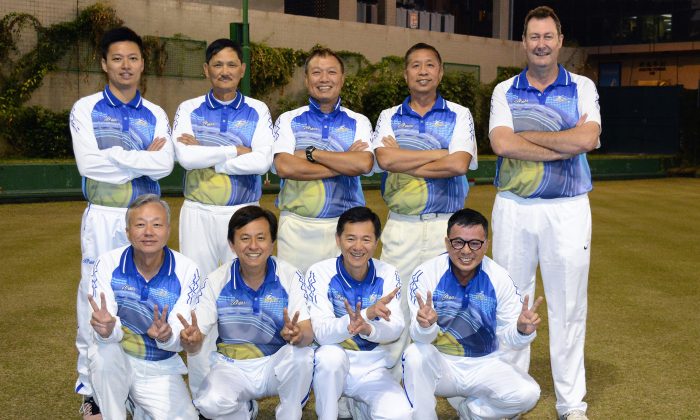 A jubilant Police team celebrates their first ever Triples League title, after defeating a strong Kowloon Bowling Green Club side away from home on Saturday Jan 31, 2015.(Stephanie Worth)
HK Lawn Bowls

HONG KONG—The Police men’s team and the women from Hong Kong Football Club won their Triples League championships in style, leading the table throughout and securing the title with a round to spare.

The Triples League, which runs for nine weeks during the winter every year, normally sees a very tight competition as the teams only play half of the games at home. Last year, Kowloon Cricket Club needed the help from Craigengower Cricket Club to take two points from Kowloon Bowling Green Club in the last game to secure their title.

For the Police, this is their first Triples League title since it was inaugurated in 2007. It is also sweet revenge for the bitter disappointment last year, when the Police B team was relegated to the second division.

The Police team played away to KBGC last Saturday, Jan 31, 2015 in the penultimate game of the season. Despite included all their core players who won this season’s Premier League, the KBGC team did not perform well in the competition and was only sitting at mid-table.

The team lead by Milo Lai needed to fight until the end to defeat top Hong Kong bowler Stanley Lai 14:12.

In the last triples, Hong Kong international Andy Chan demonstrated the importance of experience when he took four shots from the last three ends to tie with young bowler Anthony Yip.

As the second-placed CCC can only win 6-2 against the KBGC-B team, the Police increased their lead to nine points and secured their title.

In the women’s competition, Hong Kong Football Club continued their dominance to win their fourth title in a row. Considering that the team has also won the Premier League for eight consecutive seasons and recruited a number of elite bowlers to join them, it seems that such supremacy will not be changed in the foreseeable future.

The HKFC girls played the Police at home last weekend and won the game comfortably at 8-0. They have 10 points more than the second-placed Shatin Sports Association so the title was confirmed with a week to spare.

This weekend will see the final game for the men’s Divisions 1 to 6. The game between men’s Division 7 to 10 and the women’s last game will played on Valentine’s Day.