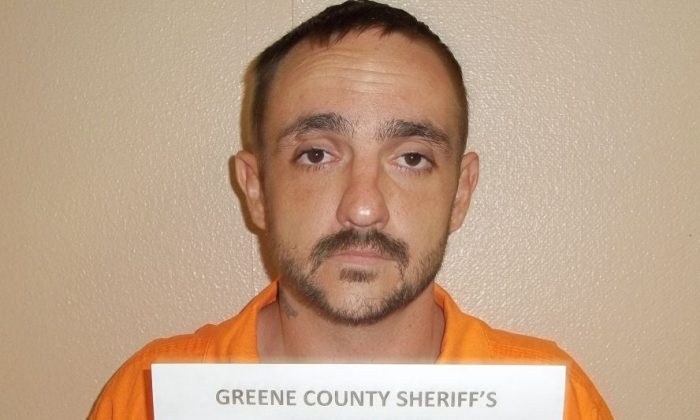 ATLANTA—A Mississippi man accused of killing five people with an ax and gunshots in a south Alabama home told investigators he parked in the woods nearby and injected methamphetamine “ice” into his veins shortly beforehand, new court records reveal.

Laneta Lester was awakened by the sound of a gunshot and saw her ex-boyfriend Derrick Dearman kill the other adult occupants of the home: three men and two women, according to search warrant affidavits.

Dearman gave “a full confession” when he was interviewed after the slayings, detectives say in the affidavits.

Dearman, 27, of Leakesville, Mississippi, has pleaded not guilty to murder and kidnapping.

He’s accused of attacking the victims as they slept Aug. 20, then kidnapping Lester. She had recently moved into the house in the small town of Citronelle, Alabama, to escape a violent relationship with Dearman.

Lester told detectives that after the five had been slain, she grabbed the only other survivor, her brother’s 3-month-old infant.

But Dearman threatened to kill her if she tried to escape with the child, she said. He found the keys to her brother’s Dodge Caliber, forced her and the infant into the vehicle and then drove toward Mississippi, court affidavits say.

Lester managed to escape after Dearman arrived at his father’s home in Mississippi, and his father brought him to the local sheriff’s office in Greene County, Mississippi, to surrender, police have said.

Dearman is charged with six counts of murder, including one count for the unborn child of a pregnant woman who was among the dead.