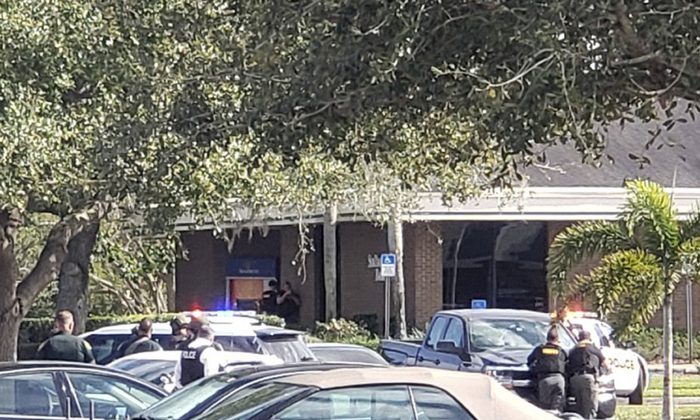 Law enforcement officials take cover outside a SunTrust Bank branch, in Sebring, Fla., on Jan. 23, 2019. (The News Sun via AP)
US News

At least five people were shot and killed inside a SunTrust Bank in Sebring, Florida, according to officials.

Zephen Xaver, 21, of Sebring, was identified as the suspect, police told ABC News.

The suspect contacted authorities, telling them he fired shots in the bank. Officers then rushed to the scene at around 12:30 p.m. local time, said the Sebring Police Department.

When officials tried to negotiate with Xavier, he wouldn’t leave the bank. A SWAT team was sent in.

Florida Gov. Ron DeSantis tweeted, “Please continue to keep the victims and their families in your prayers.”

BREAKING NEWS | We're working to gather more information and we have a crew headed to the scene now.What we know >> http://bit.ly/2Duitj7

Florida Sen. Rick Scott also stated he was sending his prayers to all involved.

“I just spoke with Highlands County Sheriff Paul Blackman to get an update on the shooting in Sebring, FL,” he tweeted. “Follow @HighCoSheriff for continued updates. Ann and I are sending prayers to those involved.”

A Facebook account with the name Zephen Xavier of Sebring, Florida, was still up. It’s not clear if it is the same person.

It’s not clear whether those who were shot are employees or customers.

There was a heavy police presence around the bank, including a SWAT vehicle.

“I know there have been multiple people shot. These are civilians injuries and I’m not going into any more into that,” Elwell told NBC News.

The suspected gunman is reportedly in custody.

Sebring Police posted a statement on Facebook, saying there was an “ongoing law enforcement incident” near the bank.

“US 27 is shut down in both directions from Golfview to Drive to Lakeview Drive due to an ongoing law enforcement incident,” the post said.

JUST IN: Suspected gunman in custody after 'multiple people shot' at SunTrust Bank in Florida.

Police urged “co-workers and family members of anyone who was at the SunTrust branch during today’s incident” to go to the nearby Inn on the Lakes.

A SunTrust spokeswoman told NBC that the bank is working with officials.

“We are working closely with officials and seeking to take care of everyone involved,” the statement said. “We will provide more information as soon as we can.”

Earlier reports said the suspect had barricaded himself inside the SunTrust location. Police officials said a man called 911 after 12 p.m. local time, saying the suspect had fired shots, WFLA reported.

Elwell also wrote on his Facebook page, “Getting more info now – none of it is good. … Please keep praying,” according to WFLA.

Sebring is located about two hours south of Orlando.

At approximately 12:36 p.m. today, the Sebring Police Department responded to the SunTrust Bank at 1901 US 27 South in…

Sen. Rick Scott also sent a tweet that he had also spoken with Blackman, adding, “Ann and I are sending prayers to those involved.”

I just spoke with Highlands County Sheriff Paul Blackman to get an update on the shooting in Sebring, FL.

Follow @HighCoSheriff for continued updates. Ann and I are sending prayers to those involved. https://t.co/CQg6zJxmT2