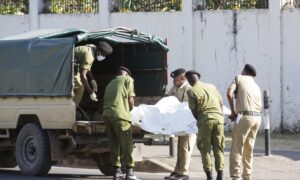 KENNEWICK, Wash.—Authorities believe one gunman killed three people and wounded another during a spree of shootings and arsons in eastern Washington on Wednesday.

A suspect was believed to have been found dead later after police fired on a vehicle.

KEPR reports that police were called about several fires and a shooting shortly before 4 a.m. in Finley, Washington. When deputies arrived at the scene, they found a man suffering from a gunshot wound and two homes on fire in the area.

Police say they believe the suspect in the arsons in Finley then set multiple fires throughout Benton County.

Flames engulfed the vehicle, and live ammunition could be heard firing inside the vehicle. Police say the body of an unidentified person was found inside the burned truck.

The investigation is continuing. But Kennewick police say the bodies of two other people were found inside another home and are believed to be connected to the suspect.