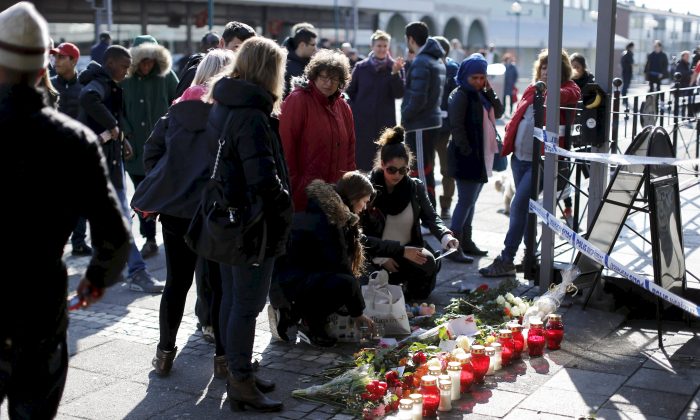 People place flowers at the scene, in Goteborg, Sweden, Thursday, March 19, 2015, a day after a shooting incident. Several people were shot inside a restaurant in the city of Goteborg late Wednesday and at least two of them have died, Swedish police said. Police said in a statement that an automatic weapon is believed to have been used in the shooting. They had no details on any suspects but said several people had been brought in for questioning. (AP Photo/Adam Ihse/TT News Agency) SWEDEN OUT
Europe

STOCKHOLM— Police say four people, including a young girl, were killed when a car exploded in a roundabout in the Swedish city of Goteborg.

The cause of Friday’s explosion was unclear but police said they had started a criminal investigation.

After initially releasing few details, police confirmed Saturday three people were pronounced dead at the scene while the girl was taken to hospital where she died. They didn’t the release the ages or identities of the victims or say whether they were related.

Rescuers said the car exploded in a roundabout near a fire station and was destroyed by the time they got there.

Goteborg, Sweden’s second-largest city, has seen a surge in violent conflicts between rival criminal gangs, including a restaurant shooting in March that left two people dead.