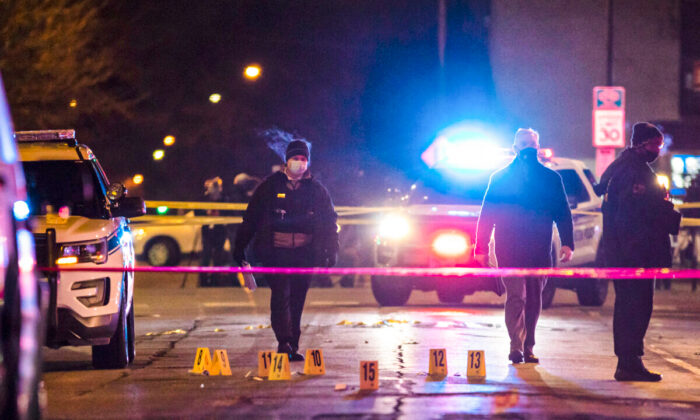 Chicago and Evanston police investigate a crime scene after a gunman went on a shooting spree before being killed by police during a shootout in Evanston, Ill., on Jan. 9, 2021. (Ashlee Rezin Garcia/Chicago Sun-Times via AP)
Illinois

At least four people are dead, and 24 others were injured in separate shootings across Chicago over the past weekend, police said.

On Dec. 11, a man who was identified as 26-year-old Siraj Mahadeva was shot and killed while standing on the porch of a friend’s house on the Northwest Side, officials told the Chicago Sun-Times. The man was found by his friend after the friend heard a loud sound at around 3:25 a.m., authorities said.

Mahadeva was taken to Mount Sinai Hospital, where he was pronounced dead, officials said.

Another man was fatally shot around noon in the West Pullman neighborhood of the Far South Side on Dec. 11, authorities told news outlets. Ralph Williams, 38, was sitting in a vehicle near West 119th Street when two individuals approached the car before one opened fire, officials said.

Williams, who was hit in the back, was taken to Christ Medical Center in Oak Lawn, where he died, police said.

A 40-year-old man was shot and killed in the South Shore community on the Far South Side on Dec. 11. He was found dead at around 3:35 p.m. near a residence, police said. The man hasn’t yet been identified.

A 21-year-old woman was found shot in the head at 10 a.m. on Dec. 11 in an apartment in the 2300 block of North Austin Avenue in Belmont Central, police told CBS2. She was pronounced dead at Loyola University Medical Center.

Officials told local media outlets that a 16-year-old male was shot and injured on Dec. 11 in Gresham on the South Side. The teen, who wasn’t identified, was sitting in a vehicle when someone in another car opened fire, striking the teen in the back. He was taken to Christ Medical Center in Oak Lawn, where his condition was stabilized, officials told the Sun-Times.

At around 2 p.m. in a separate incident on Dec. 11, two people were wounded during a drive-by shooting in Oakland on the South Side. A man and a woman were standing near the 1000 block of East 43rd Street when someone fired shots, police said.

Last weekend, officials said that at least nine people died and more than 30 were injured in shootings. At least 813 homicides have been reported this year in Chicago.