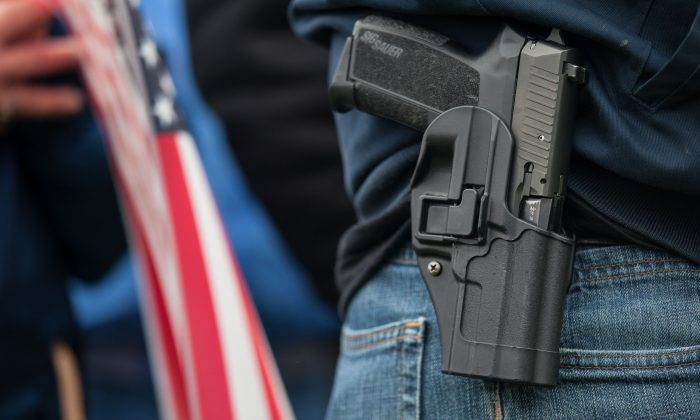 A demonstrator carries a handgun while listening to speakers at a pro-gun rally in Olympia, Wash., on Jan. 19, 2013. (David Ryder/Getty Images)
Crime and Incidents

UPPER MARLBORO, Md.—Eleven police officers in a suburb of Washington, D.C., have been suspended after two off-duty officers were wounded in what police believe to be an accidental shooting at a holiday party.

The Prince George’s County Police Department said in a statement on Dec. 17, that both officers were treated at hospitals and released early Sunday.

The statement says the department’s internal affairs division is investigating the shooting, which occurred Saturday evening at a home in Prince George’s County.

Investigators believe a single shot from a privately owned handgun wounded an officer in the hand and then ricocheted before injuring a second officer.

Police department spokeswoman Jennifer Donelan says the investigation will include whether alcohol was a factor in the shooting.

“We want to get down to the bottom of why that gun went off,” she said at a news conference. “We are very fortunate that they weren’t seriously injured.”