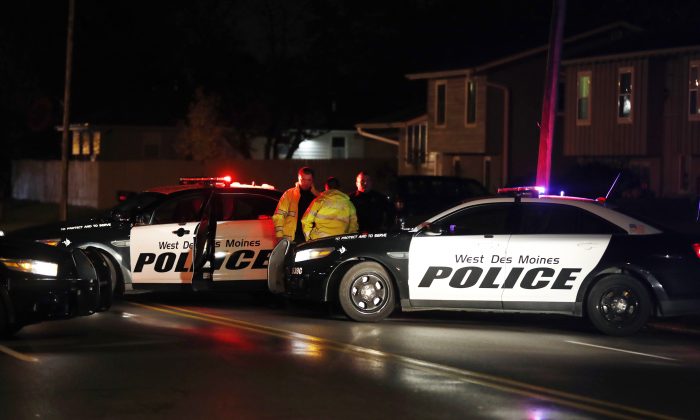 Law enforcement officials investigate at the scene of a shooting in Urbandale, Iowa on Nov. 2, 2016. (AP Photo/Charlie Neibergall)
Crime and Incidents

DES MOINES, Iowa—Two Des Moines area police officers were shot to death early Wednesday in separate ambush-style attacks while they were sitting in their patrol cars, and police said they are searching for a known suspect.

Officers responded to a report of shots fired at 1:06 a.m. and found an Urbandale Police Department officer who had been shot. Authorities from several agencies saturated the area after that shooting, and about 20 minutes later discovered that a Des Moines officer had been shot in a patrol car at an intersection, Des Moines Sgt. Paul Parizek said. The shootings happened less than 2 miles apart and both took place along main streets that cut through residential areas.

“There’s somebody out there shooting police officers. We hope to find him before somebody else gets hurt,” said Parizek, who stopped briefly during a news conference as he worked to control his emotions.

The shootings follow a spate of police killings, including ambushes of officers in Dallas and Baton Rouge, Louisiana. Five officers were killed in Dallas on July 7 and three were killed later that month in Baton Rouge.

Des Moines and Urbandale Police later said in a statement that they have identified 46-year-old Scott Michael Greene as a suspect in the killings, describing him as armed and dangerous and urging members of the public to not approach him.

Police described Greene, of Urbandale, as white, 5′ 11″ and 180 lbs with brown hair and green eyes, last known to be driving a blue 2011 Ford F-150 with Iowa license plate 780 YFR. Police did not explain how they identified Greene as a suspect.

“There is a clear and present danger to police officers,” Parizek said. He said officers are now conducting patrols in pairs for protection.

Urbandale Sgt. Chad Underwood said he believes this is the first time an officer in his department has been shot in the line of duty.

Urbandale officers are equipped with body cameras, but they don’t run constantly and it’s unclear whether there was video of the shootings.

The attacks on police this summer in Dallas and Baton Rouge came in the wake of several high-profile police shootings of black men, fueling a national debate about police use of force, especially against minorities—a frequent topic in the nation’s presidential race.

Republican nominee Donald Trump has argued that police need the freedom to use greater force, while Democrat Hillary Clinton has taken a more nuanced position of supporting officers while also calling for restraint when dealing with minority communities. The most divisive general election in memory is just six days away.

Iowa Gov. Terry Branstad called the killings Wednesday, “an attack on the public safety of all Iowans.”

“We call on Iowans to support our law enforcement officials in bringing this suspect to justice. Our thoughts and prayers go out to the families of the police officers who were tragically killed in the line of duty as well as the officers who continue to put themselves in harm’s way.”

Urbandale is a suburb of about 40,000 people in the Des Moines metro area with about 50 officers. Officials in Urbandale cancelled school for the day. Des Moines has about 375 sworn officers.