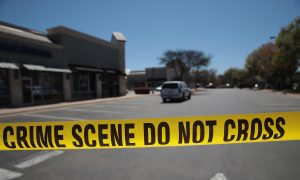 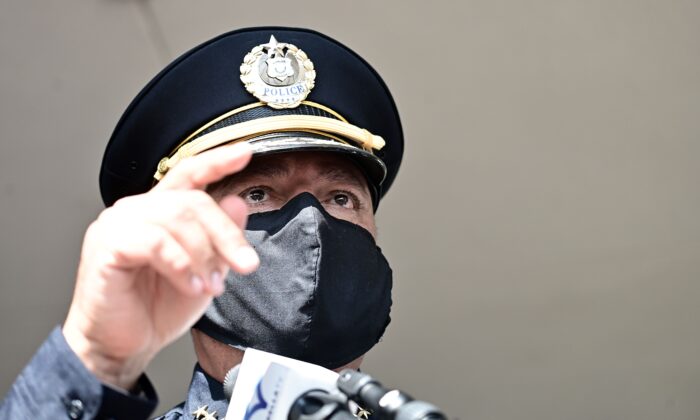 Art Acevedo, Houston police chief speaks in front of the Fountain of Praise church during the funeral for George Floyd on June 9, 2020 in Houston, Texas. (Johannes EISELE / AFP via Getty Images)
Crime and Incidents

One Houston Police officer was shot multiple times and another was injured on Tuesday when officials responded to a disturbance call around an apartment complex in southwest Houston.

Houston Police Chief Art Acevedo stated during a press conference that the incident occurred at 7:55 a.m. when the Houston police received a call regarding a disturbance with unknown weapons on the 2600 block of Holly Hall in southwest Houston.

Following the call, police were dispatched to the scene and arrived at 8:15 a.m. Three officers were on the scene—Harold Preston, a police sergeant, officer Courtney Waller, and officer Taylor.

Outside the apartment, police were met with a woman, who the officers identified as the one who filed the disturbance. She told the officers that she wanted to move out of the apartment that she shared with her estranged husband, Elmer Manzano, and wanted to get into the apartment to grab some of her things. However, Manzano would not let her in and locked the door.

Shortly before 9:25 a.m., the woman’s 14-year-old son, who was with her, unlocked the door to the apartment and saw that Manzano had a weapon. This happened after the officers walked to the apartment door to try to make contact with Manzano, police said.

“The son sees that the dad has armed himself with a firearm, and tells the officer that he has a gun,” Acevedo said. “The suspect immediately engaged officers, shooting multiple rounds at officers, striking officer Courtney Waller in the arm, and striking sergeant Preston multiple times.”

Police chief Acevedo indicated that sergeant Preston also retired fire and Manzano was struck in the abdomen. After being shot, Manzano barricaded himself in the apartment.

Officers on the scene quickly called for assistance, and around 9:31 a.m., the helicopter and canine units responded and were able to form a react team to move sergeant Preston away from the door of the apartment, all while Manzano remained armed inside the apartment.

The ambulance arrived on the scene at 9:32 a.m. to transport sergeant Preston and officer Waller to Memorial Hermann and took the 14-year-old to the Texas Children’s Hospital.

According to police chief Acevedo, both officer Waller and the 14-year-old remain in the hospital in stable condition.

Manzano, who surrendered himself at around 10:25 a.m., was also taken to the hospital, where he is in stable condition. He remains in custody and is under police supervision.