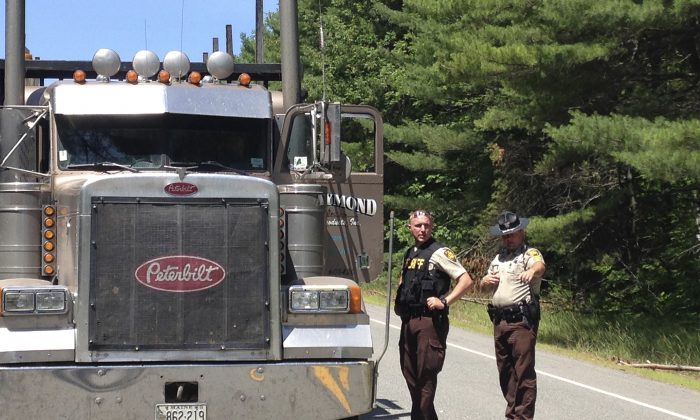 Penobscot County Sheriff deputies talk to a truck driver at checkpoint Friday, July 17, 2015, in Lee, Maine. Police were searching for a gunman in a stolen logging truck following the shootings of four people overnight in the towns of Lee, Benedicta and Silver Ridge in northern Maine. (AP Photo/Alanna Durkin)
Crime and Incidents

LEE, Maine—State police say a former convict shot five people, two of them fatally, during a rampage across several northern Maine towns before being captured.

They say a man was assaulted and guns were stolen before the shootings began in three different communities. Police also believe the suspect set fire to a barn.

Investigators say 35-year-old Anthony Lord was arrested without incident Friday at a family member’s home in Houlton. They say a woman who was with him wasn’t harmed.

Police say Lord faces murder charges. They are searching for a motive for the overnight shootings that left two men dead and two men and a woman injured. They didn’t identify the victims.

Lord has a criminal record that includes convictions for a sex crime, domestic assault, criminal threatening and assault.