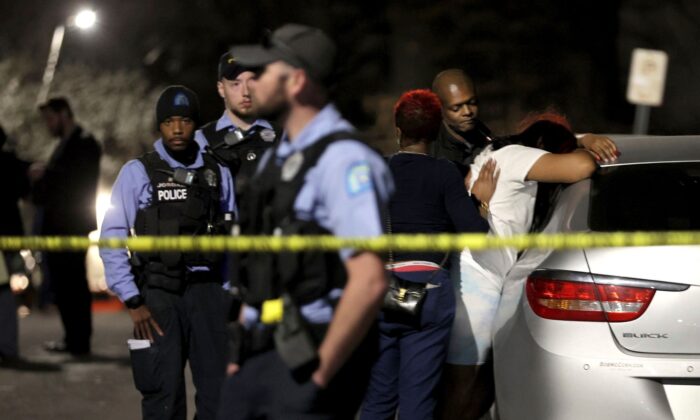 Family members of a deceased 12-year-old boy grieve at the scene where police say the child was shot and killed while playing with a gun that he and a 10-year-old found inside a home in St. Louis on March 29, 2022. (David Carson/St. Louis Post-Dispatch via AP)
Crime and Incidents

ST. LOUIS—A 10-year-old boy fatally shot his 12-year-old brother as the two played with a gun they found inside a St. Louis home, police said.

The shooting happened Tuesday night in a north St. Louis neighborhood, KMOV-TV reported. Police said the boys were with a parent who was getting a haircut in the home when the older boy was shot in the face.

Police said a woman was arrested Wednesday on a possible charge of endangering the welfare of a child, the St. Louis Post-Dispatch reported.

The death follows a spate of shootings in St. Louis involving children handling guns. On Friday, two young cousins who were livestreaming from a St. Louis apartment died when one child fatally shot the other before killing herself in what family members have said was an accident.

In February, a 12-year-old girl was wounded in an accidental self-inflicted shooting.

“As an agency, we will come out and teach everyone how to use them,” Cousins said. “We do understand people are going to own guns; however, to protect these children, we want to ensure these guns are secured safely.”