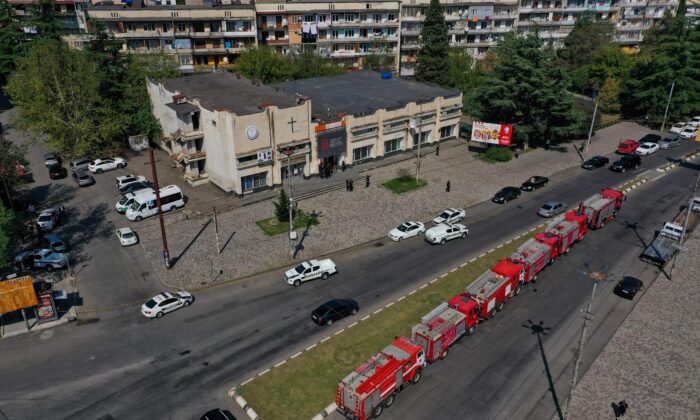 Georgian policemen and emergencies personnel are deployed outside a bank in Georgia's second-largest city of Kutaisi on Sept. 20, 2022, after an armed man took a dozen hostages demanding a large sum of money. (Gela Gogokhia/AFP via Getty Images)
World

Police: 12 Hostages Freed at Bank in Country of Georgia

TBILISI, Georgia—Police in the country of Georgia said 12 people who were held hostage in a bank by a gunman for hours Tuesday have been freed and hostage-taker has been arrested.

Georgian media reported that the gunman at the bank in the city of Kutaisi had demanded $2 million, a helicopter to leave the country and a Russian flag. The gunman reportedly announced his demands in a video posted on one of the hostages’ Facebook page.

Interior Ministry spokeswoman Ketevan Kovziashvili later said the hostages were freed and the gunman detained, but there were no further details.