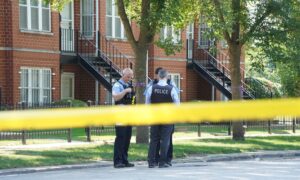 CHICAGO—One person has died and five others including a teenage girl have been injured in a shooting on Chicago’s South Side, police said.

A group of people was walking toward their vehicles in the city’s West Pullman neighborhood around 9:40 p.m. Saturday when someone inside another vehicle “fired multiple rounds, striking the victims,” according to police.

A 42-year-old woman who was shot in the arm and armpit was taken to a hospital where she later died. Authorities have not identified her.

A 32-year-old man who was shot in the face was listed in critical condition. The other victims, ranging in age from 15 to 28, were listed in fair condition at area hospitals.

No one had been arrested in the shooting, police said Sunday as the investigation continued.

No further details were released.