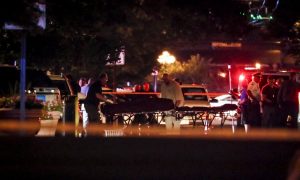 One person was killed and four others were wounded in a shooting near a Chicago suburb on Sunday, officials said.

The Aurora Police Department wrote on Twitter that the shooting took place around 700-block of 5th Street.

“Officers and detectives are currently on scene beginning an investigation,” police tweeted.

Local authorities told WLS-TV they got multiple calls at around 2:30 a.m. local time, adding that police entered a home and found three people who were shot.

Those three people were taken to nearby hospitals. One of them later died, the report said.

The Aurora Police Department is currently investigating an incident in the 700 block of 5th Street that left multiple people shot and one dead.

Officers are detectives are currently on scene beginning an investigation.

Two other people walked to an area hospital, officials said.

The four who were wounded have non-life-threatening injuries, WLS-TV reported.

Aurora Police Department spokesman Paris Lewbel told The Associated Press that officers and detectives are on the scene and investigating.

Aurora is about 40 miles from Chicago.