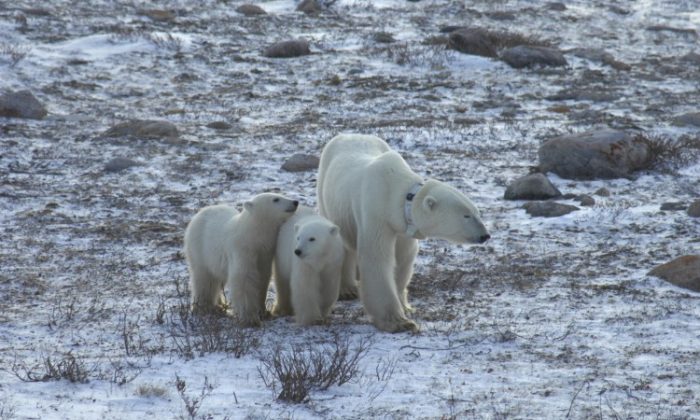 A mother polar bear wearing a tracking collar waits with her two cubs for the sea ice to re-form. (Copyright Andrew Derocher, University of Alberta)
Science

Polar bears in western Hudson Bay are struggling with sea ice that doesn’t last long enough due to climate change, according to a new study.

“Climate-induced changes that cause sea ice to melt earlier, form later, or both, likely affect the overall health of polar bears in the area,” study lead author Seth Cherry from the University of Alberta said in a press release.

“Ultimately, for polar bears, it’s survival of the fattest.”

In western Hudson Bay, all the sea ice melts in the summer, so the polar bears have to live on land. They can’t eat seals during that time because they need the ice to go seal-hunting.

Seals are their main food source, and when the polar bears have to spend a long time stuck on land, they must use their body fat to sustain themselves.

The researchers tracked 109 female polar bears from 1991 to 1997 and from 2004 to 2009. They couldn’t track male polar bears because their necks are thicker than their heads, so collars don’t stay on them.

This gave them more than 10 years of data about the bears’ migration habits.

“The data suggest that in recent years, polar bears are arriving on shore earlier in the summer and leaving later in the autumn,” Cherry said.

“These are precisely the kind of changes one would expect to see as a result of a warming climate and may help explain some other studies that are showing declines in body condition and cub production.”

Since the 1990s, the polar bear population in Hudson Bay has declined, and so has their health. Cherry hopes that the team’s research will help other scientists study how changes to the sea ice affect the bears’ migration patterns.

The paper was published in the Journal of Animal Ecology on March 20.