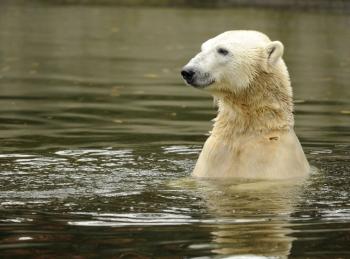 Polar bear Knut swims in his enclosure at the Tiergarten zoo in Berlin, October 19, 2010. (Odd Andersen/AFP/Getty Images)
US

Polar Bears’ Habitat in the Arctic Designated as ‘Critical’

“The critical habitat designation clearly identifies the areas that need to be protected if the polar bear is to survive in a rapidly melting Arctic,” said Brendan Cummings, senior counsel with the Center for Biological Diversity, in a statement.

The final designation of critical habitat includes three areas. The habitats are barrier island (coastal barrier islands and spits along Alaska’s coast); sea ice (areas over the continental shelf used for refuge from humans); and terrestrial denning (lands within 20 miles of the northern coast of Alaska between the Canadian border and the Kavik River). An estimated 96 percent of the sea ice habitat is designated as critical habitat.

According to the Center for Biological Diversity, the Department of the Interior is considering if oil companies will be allowed to drill for oil in the bears' critical habitat in the Chukchi and Beaufort seas off Alaska.

President Obama halted drilling plans earlier this year, when he shut down offshore drilling in many areas of U.S. coastal waters in response to the BP oil spill.