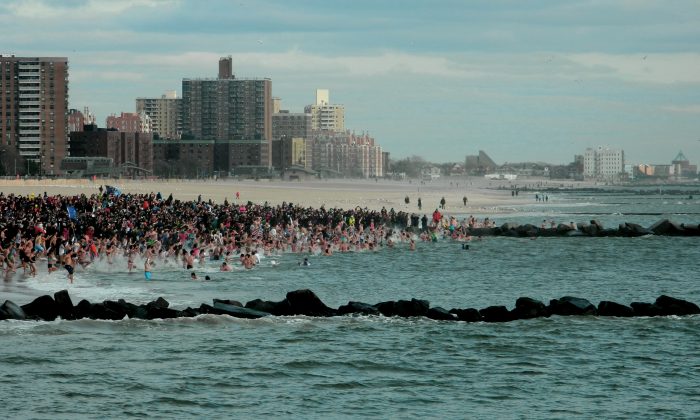 NEW YORK—New Year’s Day was a time to chill out for a throng of adventuresome swimmers who started 2016 with a dip in the Atlantic Ocean off New York City.

An estimated 2,000 people participated in the annual Coney Island Polar Bear plunge on a seasonally chilly Friday. National Oceanographic and Atmospheric Administration measurements show air temperatures in the area were in the low 40s, while the ocean was a bit warmer.

Some people wore wetsuits, but others sported only bikinis.

Sixty-two-year-old Peter DeAngelo was garbed as the Jolly Green Giant for his 10th Polar Bear swim. He tells the Daily News of New York that it’s “something you can never explain,” but it gets adrenaline flowing.

The event raises money for Camp Sunshine, a camp for children with life-threatening illnesses.