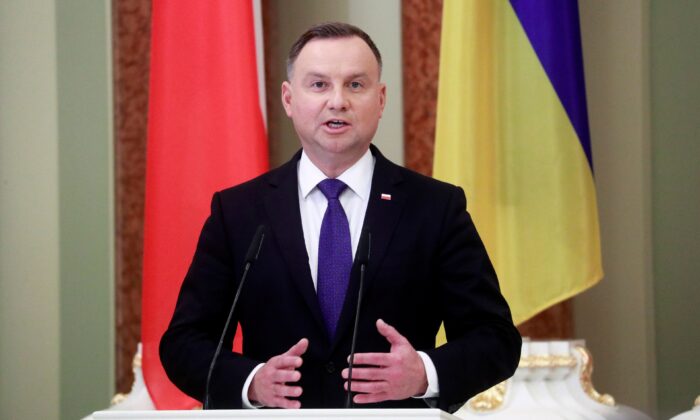 Polish President Andrzej Duda holds a joint news briefing with his Ukrainian counterpart as part of their meeting, in Kiev, Ukraine, on Oct. 12, 2020. (Valentyn Ogirenko /Pool/AFP via Getty Images)
Companies

WARSAW, Poland—Poland President Andrzej Duda has vetoed a controversial media measure that would have forced U.S. company Discovery to give up its controlling stake in Polish television network TVN, with the president acknowledging the free speech concerns of the legislation’s opponents and suggesting that it would have strained relations with the United States, a key Warsaw ally.

Duda said at a Dec. 27 press conference in Warsaw that while he backs future legislation that would curb the ability of foreign capital to control Polish media outlets, the current measure’s retroactive effect would be unfair to investors and would violate a U.S.–Poland trade treaty signed in the 1990s.

“If we signed an agreement, we have to abide by it,” Duda said. “Then we can say we’re an honorable nation. And that’s how I want Poland to be seen by its allies.”

The legislation, recently approved by the lower chamber of the Polish Parliament, would have blocked any non-European entity from owning more than a 49 percent stake in television or radio broadcasters in Poland. Dubbed “lex TVN,” the measure would have forced Discovery to relinquish its majority stake in TVN, the largest private television network in Poland.

Some critics of the legislation have alleged that it was motivated by a desire on the part of the ruling Law and Justice (PiS) Party to punish TVN for critical coverage. Former Polish Prime Minister Donald Tusk, who leads the main opposition party and made remarks to that effect at recent anti-lex TVN demonstrations, wrote on Twitter on Dec. 27 that a combination of street protests and U.S. opposition to the measure forced Duda’s hand.

In a nod to the concerns raised about the measure, Duda said one of the arguments weighing on his decision was “the matter of media plurality and freedom of speech.”

However, Duda made clear that his veto doesn’t put the issue of foreign ownership of media outlets in Poland to rest, urging lawmakers to reconsider the legislation and come up with a version that doesn’t have a retroactive effect on investors.

“For those who want to invest in our country, in the future, after such regulations take effect, they’ll have clarity on the conditions under which they can manage their investment,” Duda said.

The Law and Justice Party, of which Duda is a member, has long said foreign media groups wield too much power and distort public debate in Poland.

“I believe that generally limiting the possibility of holding shares or stocks in media companies is sensible when it comes to foreign capital,” Duda said at the presser, citing examples of the United States, France, and Germany, which have such laws in place. “I share the opinion that it should be introduced in Poland, but for the future.”

Calling the veto a “victory for the Polish people,” Discovery said in a statement that it “[commends] the president for doing the right thing and standing up for core democratic values of a free press and the rule of law.” TVN praised the decision in a statement, saying that Duda stood up for press freedom and good relations with the United States.

The Chargé d’Affaires at the U.S. Embassy in Poland, Bix Aliu, took to Twitter to thank Duda for the decision, saying that it was good for democracy and that it “protected the investment climate in Poland.”