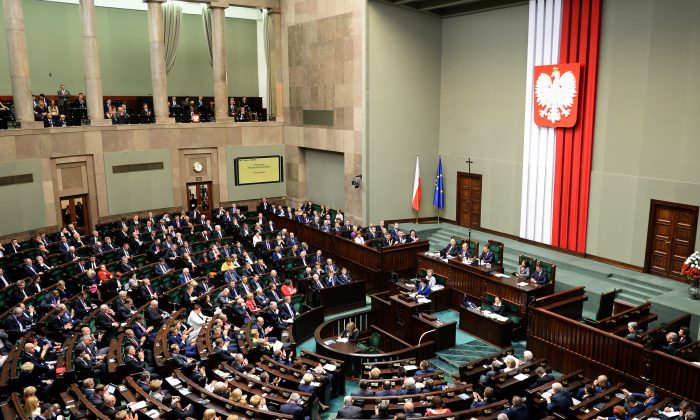 The legislation is another element in the sweeping reforms that the ruling conservative Law and Justice party, in power since November, is quickly introducing to some state bodies. Reforms to the Constitutional Tribunal and to state media have put Poland at odds with the European Union, which has opened a procedure checking whether they respect the bloc’s principle of rule of law.

That decision Wednesday by the EU’s executive body, the European Commission, came as a bitter surprise to the leaders in Warsaw, who argue they have the voters’ mandate to reform the country. They accuse the liberal and pro-EU opposition of bringing Poland’s internal disputes to the EU forum.

Law and Justice says it aims to help the underprivileged to share in the country’s exemplary economic growth. More reforms are planned that include putting prosecutors under direct authority of the justice minister, imposing taxes on banks and supermarkets and giving monthly bonuses to families with at least two children.

Polish Prime Minster: No Risk of EU Sanctions Against Poland

The ruling party, which links national Catholic values with its welfare agenda, encounters no obstacles in adopting new legislation because it controls the parliament, the government and the presidency.

On Friday, Parliament voted 234 -213 with three abstentions to adopt regulations proposed by the ruling party, which argues they will help ensure security. They give police more possibilities of surveillance of a suspect’s movements and of his presence on the Internet, but require detailed reports to be submitted to court control.

The measures still require approval from the Senate and the president before they can take effect Feb.7.